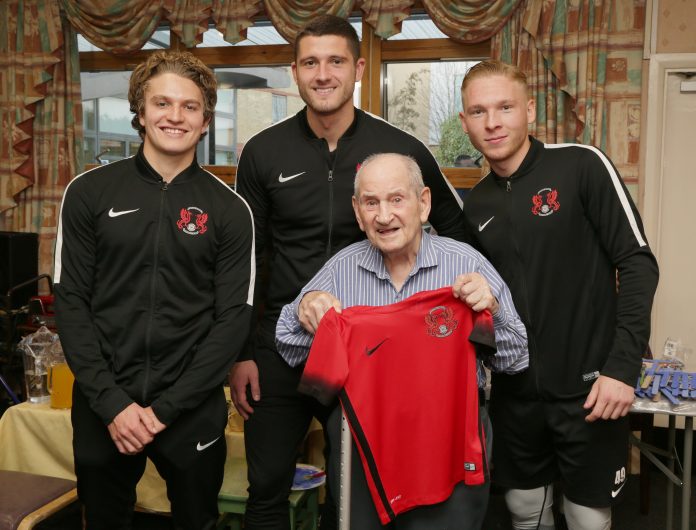 On Thursday 23rd November, Leyton Orient players, Myles Judd, Freddy Moncur and Jamie Sendles-White were greeted with a warm welcome from residents of Jewish Care’s Vi & John Rubens house in Ilford. The visit was arranged as part of Mitzvah Day, the community wide inter-faith day, bringing together people to unite for social action across communities.
Resident and lifelong Orient fan, 97-year-old Harry Buitekant talked to the players about his history with the club and his fond memories of attending games from the age of 6. He said; “My proudest moments were standing outside the grounds after we had won to see the players and congratulate them. I remember when we were playing in the 1st division”.
95-year-old Monty Ward was delighted to be able to chat to the players about his memories of Orient, the team that Monty and all his friends supported.
Former Boxer Harold Crown told the players about his own sporting achievements showing them how he ‘packed a punch’ and sharing stories of big name sports stars that he had met.
Midfielder, Freddy, 21, said, “I am really happy to be here again. It was good to see familiar faces and chat to both the residents I met on my last visit and some new people too. Lots of smiley faces which has been good to see”.
His team mates Myles and Jamie agreed; “It’s nice to come somewhere different and be able to put smiles on people’s faces”.
Howard Gould, Orient’s Community Liaison Manager began organising the annual visits following a conversation with Leyton Orient fan and Director of Jewish Care Neil Taylor. Howard commented,
“Visiting Vi & John Rubens as part of their Mitzvah Day celebrations is always a pleasure. We always meet some passionate lifelong fans who talk about their favourite players who none of us have ever heard of because they are often going back 70 or 80 years. We always leave feeling inspired and leave with a smile. We look forward to coming back again soon”.