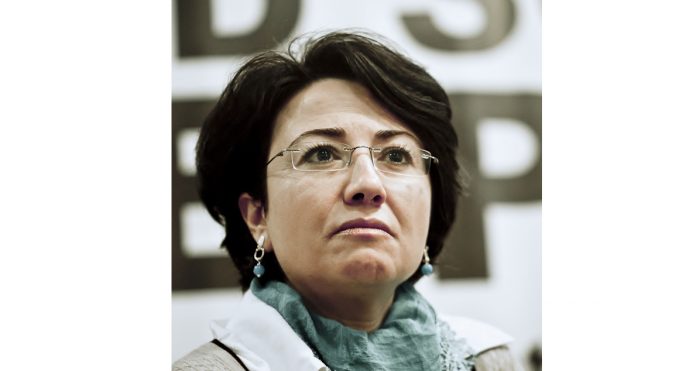 Violence erupted at yet another Palestinian Solidarity Campaign meeting last weekend when pro-Israel supporters were frustrated the radical speaker, Haneen Zoabi would not take questions from the floor as she continued to spurt out what can only be described as hateful incitement.

In a muddled speech without any real direction or thought process, the Israeli member of Knesset told her audience of around fifty people that Israel is a “racist” and “fascist” state with “racist laws and fascist laws.”

MK Zoabi who is well known in Israel for her radical hateful speeches in the Knesset said that Israel is “afraid” of allowing people to visit “our homeland” and described the Jewish state as the “criminal.”

She then attacked Britain because of agreements forged with the Jewish state and asked because Israel “shoots 12-year olds and then you [Israel] talk about terrorists – who is the terrorist?”

Without pausing or taking a breath, Haneen Zoabi showed she was in a hurry to express as much propaganda, most of it pure nonsense, as possible, before moving on to the Shoah.

However, it was not clear why the pro-Palestinian audience was clapping at that point until Zoabi said “The lesson from the Holocaust is don’t kill, but Israel kills a Palestinian every 3.6 days.”

She then moved on to the well-known words, “the occupation,” “oppression,” “crimes against humanity,” “war crimes,” “the criminal Zionist lobby,” and “how can a Jewish state be a democratic state,” and after around 25 minutes, Zoabi compared Israel to Germany in the thirties.

At that point the three pro-Israel supporters present shouted, “Shame on you,” which is when three pro-Palestinian supporters ran towards them, one threatening if you don’t stay quiet, I will “physically throw you out.”

Mandy Blumenthal along with her brother Allen were present and asked why were they not allowed to ask questions? Palestinian activist Sarah Wilkinson from the West Midlands and well known on social media for her own incitement against Jewish people living in Israel, grabbed Ms Blumenthal’s smart phone as she was recording the proceedings and ran with it to the other side of the room which was captured by a pro-Palestinian supporter who was videoing the action. Mandy was seen running after her at which point the two were on the ground wrestling as her brother Allen tried to help.

Allen was then grabbed by several of the crowd, but he held his arms high in the air as if to say he was not a threat. Mandy emerged from the floor with scratches and bruises and after some other exchanges, Mandy, her brother and another man were ejected.

Speaking to The Jewish Weekly, Ms Blumenthal from North West London said that she has been to many pro-Israel and pro-Palestinians events before, but had never witnessed such violence and was still in shock. Clearly finding it difficult to talk, Mandy said, “The amount of hatred and anti-Semitism that is heard at some of these meetings is awful.”

The strange thing is that it was a pro-Palestinian supporter who posted the video on YouTube with the message that “Zionists had attacked members of the West Midlands PSC in Birmingham’s Science Park.

When asked would Mandy consider pressing charges against this woman Sarah Wilkinson, based on the video evidence by one of their supporters, she replied, “Yes I would.” On the question of whether she would continue to attend these meetings and events, Mandy Blumenthal said “I can tell you that sometimes I have made a difference” and cited the example of the Litchfield Cathedral when the Archbishop was made aware of some basic facts that he did not previously know about Israel.