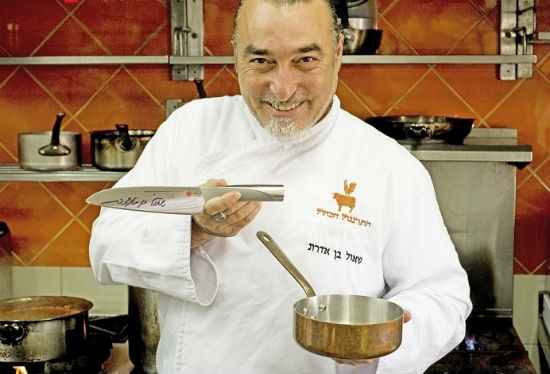 Members of the Palestinian Solidarity Committee and the Boycott, Divestment and Sanctions Movement (BDS), again gave in to temptation this week whilst they were shouting anti-Israel slogans outside the Tel Aviv in London event.

The special festival known as TLV in LON featured musical acts, a Tel Aviv food market and many other engaging events which took place at multiple sites across London this past week. But as expected demonstrators tried to disrupt the event calling for the destruction of Israel. That is until the famous Israeli celebrity chef, Sh’aul Ben Aderet appeared with trays of free delicious deserts. Behind him were assistant chefs also with trays and a selection of more deserts.

At first the demonstrators refused the food saying they were from the “Israeli fascist state,” until Chef Ben Aderet said in a calm voice but heavy Israel accent, “Come on, have some desert” and “Let’s leave the politics out of it and enjoy the desert.”

Many were seen on a video which was posted on social media, coming forward and saying such things as, “What Israel does to the Palestinians is criminal, but we will try your desert,” and “Can I take another one for my friend.”

The story is the same worldwide – many of the demonstrators call for Israel’s destruction but are happy to use Israeli made phones, computers, software and apps.
The TLV in LON event was billed as celebrating and showcasing the diverse culture of the vibrant Tel Aviv and was an opportunity to revel in the city’s rich cultural landscape, encompassing gastronomy, music, nightlife, arts and style.

The idea for the festival came from British Jewish philanthropist Marc Worth, the Israeli Embassy in London and the Strategic Affairs Ministry in Israel which is headed by Gilad Erdan.

Knesset Member Erdan said “The Tel Aviv in London festival was the first one to take place in a major capital which reflected multiculturalism in Israel and showed the truth about life in the country.”
The Minister added that the objective was to build bridges and was a serious blow to the racist Boycott, Divestment and Sanctions (BDS) movement.