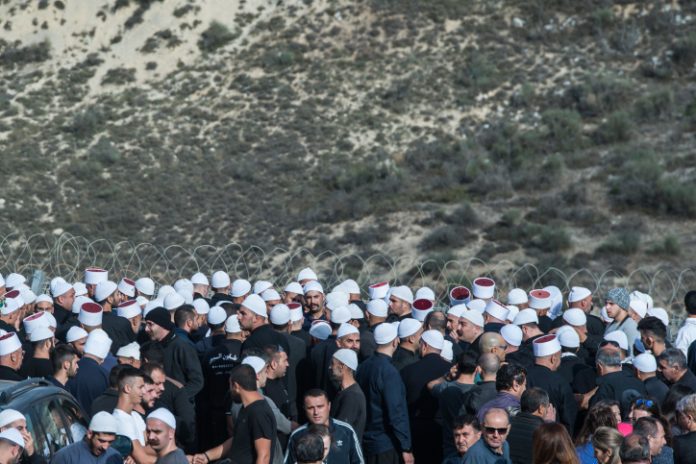 Israeli police arrested seven residents of the Golan villages of Majdal a-Shams and Kinia.
The seven, who included two minors, are accused of breaking through the Golan border fence on Friday. They were attempting to assist residents of the Syrian Druze village of Khader, at the foot of Mount Hermon, who were fighting Syrian rebel groups associated with al-Qaida. They entered into Syrian territory before being caught by the IDF.
Police have accused the seven individuals of rioting, attacking police officers and soldiers, damaging the security fence and entering the restricted buffer zone between Israel and Syria. A police spokesman added that their actions “threatened the lives of residents and soldiers in the area”.
On Friday, members of the jihadist group Jabhat al-Sham detonated a car bomb in Khader killing at least nine people. This was followed by the villagers and jihadists exchanging rocket and small arms fire, some of which spilled over into Israeli territory and lightly injured a resident of Majdal Shams.
The fighting raised fears among the Israeli Druze community in the Golan that the village was going to be captured by the jihadists. In response, hundreds of Israeli-Druze demonstrated near the border fence, with a few breaking through. Druze leaders also demanded that the Israel take an unequivocal position in a meeting with the Northern Command head Maj. Gen. Yoel Strik.
This resulted in the IDF stating on Friday that it “was prepared to assist residents of Khader to prevent occupation” by the rebel groups, “as part of our commitment to the Druze population”. This position was a significant departure from the IDF’s long-held position of non-intervention in the Syrian Civil War.
Writing in Maariv on the significance of the IDF statement, Yossi Melman argued that “aside from the four objectives that Israel set for itself in the war in Syria—non-intervention, preserving the quiet on the border, retaliating for any violation of its sovereignty, and preventing the transfer of sophisticated weaponry to Hezbollah—a fifth objective has been added: defending the Druze in Syria (who number about one million), even though most of them back the [Assad] regime”.