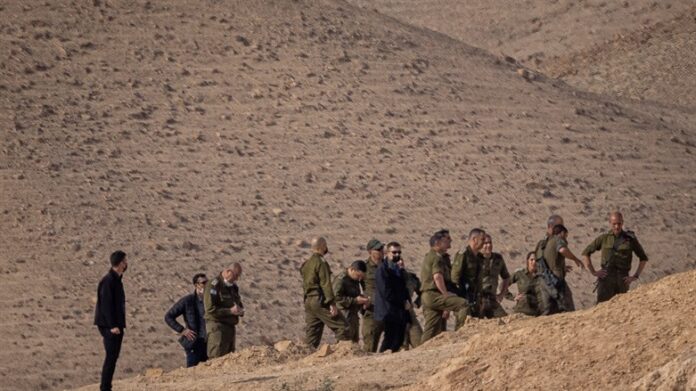 Prime Minister Naftali Bennett has vowed that an investigation will take place into the incident.

“The whole nation of Israel mourns,” Bennett said in a statement. “The IDF is investigating the difficult incident and the necessary lessons will be learned.”

Aharon’s father, Eli, called on IDF Chief of Staff Aviv Kohavi for answers regarding the tragedy.

“I want an explanation from Kohavi,” he said during the service.

Kohavi confirmed he would investigate rigorously to learn lessons during a visit to Nabi Musa base.

“The incident was incredibly serious and deeply upsetting,” he said. “Preserving human life is at the top of our priorities.”

At Elharar’s funeral, his mother told mourners that she told her son to take care of his soldiers.  “Everywhere you went you left such a big mark, you left a legacy,” she said.

Maj. Gen. Yehuda Fuchs, commander of the IDF Central Command, said Elharar, 26, was to start a university course whilst in the military whilst Aharon, 28, was to be promoted this summer within Egoz or to the Golani Brigade as a deputy battalion commander,

“The two commanders devoted their best years to Israel’s security and defense of the homeland,”

Both officers of the elite Egoz unit were killed by mistake by another officer during a training exercise in the Nabi Musa base in the Jordan Valley last Thursday night, the military confirmed.

The Nabi Musa training base is used by infantry units and Armored Corps for combat training.

Palestinian and Bedouin villages are nearby.

The tragedy came a week after Air Force pilots Lt.-Col. Erez Sachyani and Major Chen Fogel were killed in a helicopter crash off the coast of Haifa. The IDF is investigating the incident.

Sachyani (38) served as deputy commander of the Ramat David airbase in northern Israel.

Fogel (27) was a helicopter pilot and Deputy Commander of the 193 Squadron at Ramat David.

He was posthumously promoted from Captain to Major.

A third officer is in stable condition at Rambam Health Care Campus.

“In the name of all citizens I would like to extend heartfelt condolences to the families of the crash victims and a speedy recovery to the wounded officer,” Bennett said. “The people of Israel will not forget the sacrifice they made, day and night, to the security of the country.”

The Eurocopter AS565 Panther helicopter was conducting a training flight when it crashed.