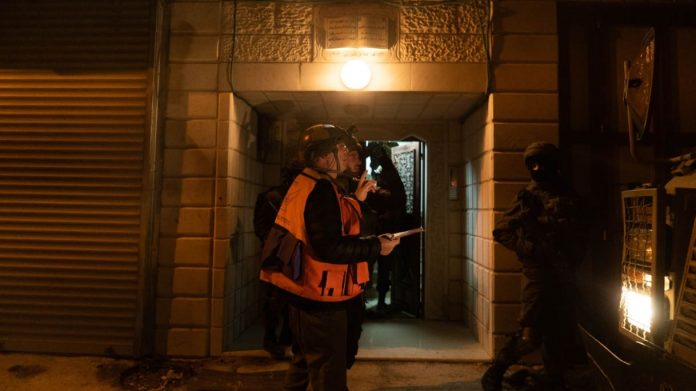 A 29-year-old Palestinian man has been remanded in custody following the brutal murder of 19-year-old Ori Ansbacher in the woods at Ein Yael on the outskirts of Jerusalem.

Arafat Irfayia has admitted the atrocity, stating it was ‘nationalistically motivated’, following his arrest in a building near a Ramallah mosque where he was hiding.

Counterterrorism officers tracked him down on Saturday night. An additional suspect was arrested inside the place of worship.

Irfaiya was identified through DNA found at the murder scene where Ori’s naked body was discovered with multiple stab wounds.

Shin Bet security services described the killing as an act of terrorism.

Prime Minister Benjamin Netanyahu and his wife Sara have visited the Ansbacher family at their home in the West Bank settlement Tekoa to pay respect.

“Ori walked the earth confidently, having faith in the world, when an evil force came and took her from us,” said Ori’s mother, Noa Ansbacher, in a statement.

“She was a noble soul, beautiful inside and out.”

Information led border police to the terrorist hiding in a mosque 15 km north of Jerusalem.

A SWAT unit was sent to the location, where they evaded Palestinians throwing Molotov cocktails, stones and burning tyres.

Officers couldn’t locate the suspect at first but after examining local CCTV footage, including at the Jamal Abdel Nasser mosque, arrested the unarmed suspect without resistance.

Surveillance footage from a camera inside the mosque has since appeared on social media.

Palestinian terror groups have yet to claim responsibility and Palestinian officials have as yet not condemned the murder.

Police officers have retraced Ansbacher’s last steps as part of a fast-moving investigation.

A gag order has been placed on certain details of the murder case.

Irfayia, believed to be associated to Hamas, had previously served a sentence for possession of a knife and was illegally living in Israel.

Security forces have located the home of Irfayia ahead of a possible demolition.

Hundreds held a candle-light vigil at Tel Aviv’s Rabin Square on Saturday night, while 100 demonstrators appealed to Israel’s government to avenge the murder in a rally at Jerusalem’s Zion Square.

Many demonstrators blocked the entrance to Jerusalem, chanting “The people demand revenge.” And dozens of local residents attended a memorial at the main square of Tekoa.

Public Security Minister Gilad Erdan said the attack was terrorist motivated prior to the official announcement when speaking on Reshet TV.

“We’re talking about a wide phenomenon of terrorism we’re dealing with here,” he noted.

The murder has resonated around the world.

World Jewish Congress condemned a “savage hate crime” and were horrified by the heinous murder.

“We send our heartfelt condolences to Ori’s family, and stand with the people of Israel as they grapple with the reality of this latest act of terror,” said WJC CEO Robert Singer.

“Although the circumstances of this crime were initially unclear, we are grateful that the Israeli authorities succeeded in locating the perpetrator and clarifying his motives.

“We sincerely hope that the swift apprehension of this bloodthirsty killer will serve to deter copycats from replicating this horrific act.”

Singer added, “It is incumbent upon the Palestinian authorities to condemn this outrage as an act of terrorism and take all measures to curb the incitement that encourages such hatred and brutality to thrive among Palestinians.

“Terrorism will never cease until the Palestinian Authority makes clear that it will not be tolerated.”

Residents of Palestinian villages near the settlement are expected to pay condolences to the family. The 10-person delegation is an initiative of the Israeli Tag Meir umbrella organisation.