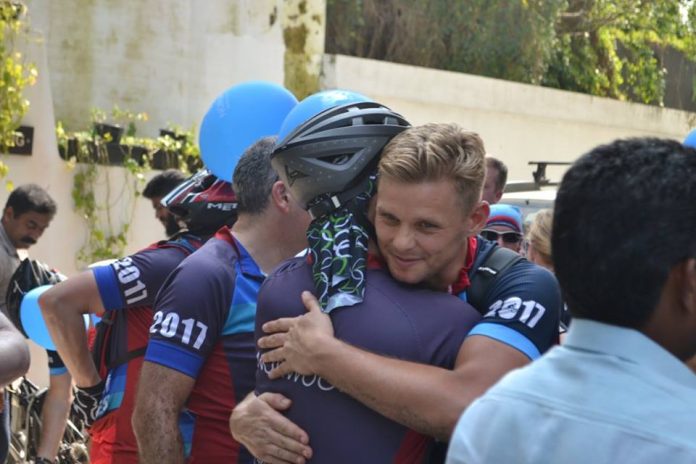 Reality TV star and grief counsellor Jeff Brazier speaks about taking to the roads of Kerala, Southern India in his latest Cycling Challenge for UK charity Norwood.
Jeff Brazier returned to the UK on Sunday, 5 November having joined more than 20 other cyclists to take on a five day, 358km charity bike ride across Kerala for Jewish charity Norwood. He is a long-term supporter of the charity, which supports vulnerable children and their families, children with special educational needs and people with learning disabilities and autism.
Having previously cycled in Madagascar and Sri Lanka to raise money for Norwood, Jeff said he was inspired to get back in the saddle “to regain confidence that I still had that mental strength to succeed”.
“It’s been a couple of years since my last Norwood Challenge,” he said. “And I really needed to have a break from the day-to-day routine of working and being a dad. At the same time I really wanted to test myself and do something for Norwood, which is a charity that does such great work. These Challenges are a great way to do that, I feel ten feet tall!”
The Challenge started at Cochin on the south-west coast of India, before taking the cyclists through the forests of Neriyamanagalam, the holiday resort of Munnar and the Idukki and Kulamavu dam.
“The Challenges are always tough, which they need to be so you get a sense that you’ve really earned all of the sponsorship money,” Jeff said. “But this one was particularly hard; on the Monday we must have cycled for about 10 hours and climbed almost 2,000 metres. You soon forget about the physical pain though when you’re riding with such inspirational people, like Lawrence from (Norwood residential complex) Ravenswood who was riding tandem with Norwood Sports Coach Jonathan Green for the whole week.”
Jeff also spoke about the friendships he has made through completing multiple Norwood Challenges. Many of his fellow Challengers have learning disabilities and are supported by the charity itself.
“On every Challenge you make new friends and it’s a brilliant group atmosphere. One of the best things about Norwood Challenges is riding with the people the charity supports. The amazing effort these people put into the cycling is truly inspirational. Added to that the fact that you’re raising money for a charity that does such amazing work and it’s just such a layered, incredible experience.”
If you want to donate to Jeff’s fundraising effort you can do so at: https://t.co/6Q62YEhgNK
Norwood will soon be launching its programme of Challenges for 2018. Brand new Challenges including Fat Biking in Finland and The Sierra Nevada Trek (Spain) see the charity branching out even further. See the full programme here: https://cms.norwood.org.uk/challenges/