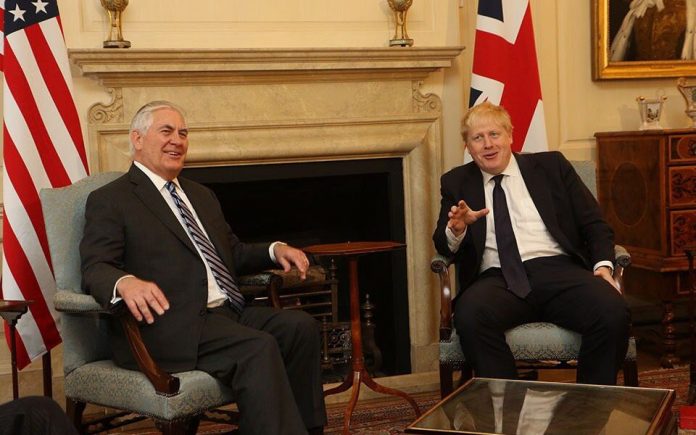 UK Foreign Secretary Boris Johnson said yesterday that US President Donald Trump’s decision to recognise Jerusalem as the capital of Israel could be a “moment of opportunity” for peace in the Middle East.
Following talks with US Secretary of State Rex Tillerson in London yesterday, Johnson said “the world waiting to see with great interest what the US is going to produce by way of a proposal on the Middle East peace process,” suggesting that after the Trump’s Jerusalem announcement “one would expect some symmetrical movement in the other direction to get things moving”.
In December the Foreign Secretary said President Trump’s Jerusalem announcement was “not helpful”.
The Foreign Secretary and Tillerson also discussed the recent moves by Turkish forces into northern Syria. Johnson said: “We understand that the Kurds have been instrumental in taking the fight to Daesh [ISIS], and everybody appreciates that. On the other hand, Turkey does have a legitimate interest in protecting its own border.”
Tillerson called for both sides to show restraint and minimise civilian casualties, and that the US is aiming to “see what we can do to work together to address Turkey’s legitimate security concerns”.
They also spoke about Trump’s vow to withdraw from the Iran nuclear deal if certain aspects of the deal are not addressed, despite Europeans – including Britain – reiterating their commitment to the agreement. Tillerson discussed the importance of how to fix the “flaws” in the Iran deal via a “side agreement”.
Johnson said there was a “pretty wide measure of agreement on the European side about the need to look at what Iran is doing on the ballistic missile front and to work out what we can do collectively to constrain that activity.” “We think we can do that together,” and that it would be done in “parallel” to the Iran nuclear deal, he said.
Despite the two countries taking different positions on major issues recently, Tillerson said Washington does see its connection with London as a “special relationship,” adding that sometimes the two sides “forget” its importance.
Johnson echoed Tillerson’s support for the special relationship, saying: “It is always worth saying that the relationship between the US and the UK is absolutely fundamental to our diplomacy but also to our economy”.