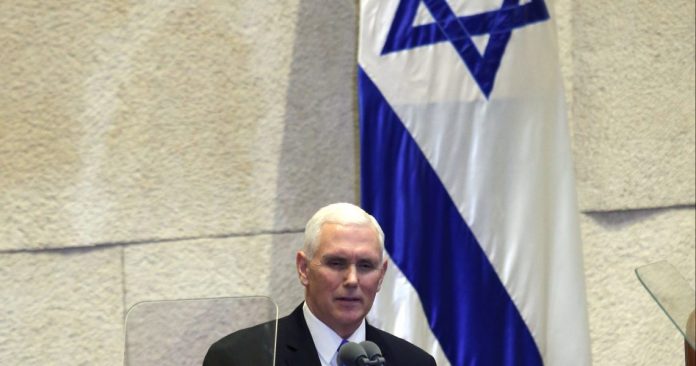 Mike Pence became the first US Vice President to address the Israeli Parliament earlier this week as part of his four-day tour of the Middle East.
He told the Knesset: “We stand with Israel because we believe in right over wrong, in good over evil, and in liberty over tyranny. We stand with Israel because that’s what Americans have always done, and so has it been since my country’s earliest days.”
Pence said “Jerusalem is Israel’s capital” and that the US will open its embassy in Jerusalem by the end of 2019, confirming that the move is being accelerated after officials earlier said it could take three to four years.
On Iran and the nuclear deal, Pence said the Trump administration is “working to enact effective and lasting restraints on Iran’s nuclear and ballistic missile programmes. Earlier this month, US President Donald Trump waived sanctions on Iran to give the Congress and our European allies time to pass stronger measures. But as President Trump made clear, this is the last time. Unless the Iran nuclear deal is fixed, President Trump has said the US will withdraw from the Iran nuclear deal immediately”.
Referring to peace talks between Israel and the Palestinians, the Vice President said Trump “reaffirmed that, if both sides agree, the United States of America will support a two-state solution”.
Arab Members of Knesset were forcibly removed from the Israeli parliament after protesting at the start the speech. The lawmakers heckled Mr Pence and held signs which read: “Jerusalem is the capital of Palestine”. A scuffle erupted as ushers forced them out of the Knesset.
In the evening Israeli Prime Minister Benjamin Netanyahu hosted Pence and his wife at the official residence. Before the meal, Netanyahu reflected on the Knesset speech: “I want to commend you for your magnificent speech in the Knesset today. You saw people standing up again and again, applauding you, applauding the principles that guide your policy, applauding the genuine friendship that emanates from your heart.”
“The Vice President and I also discussed opportunities for advancing peace. As countries in the region increasingly realise that Israel is not their enemy but a great ally of their wishes for a better future, the chances grow for a broader reconciliation,” Netanyahu said. It emerged on Wednesday that former Chief Rabbi Lord Sacks played a key role in helping with the U.S. Vice-President speech.