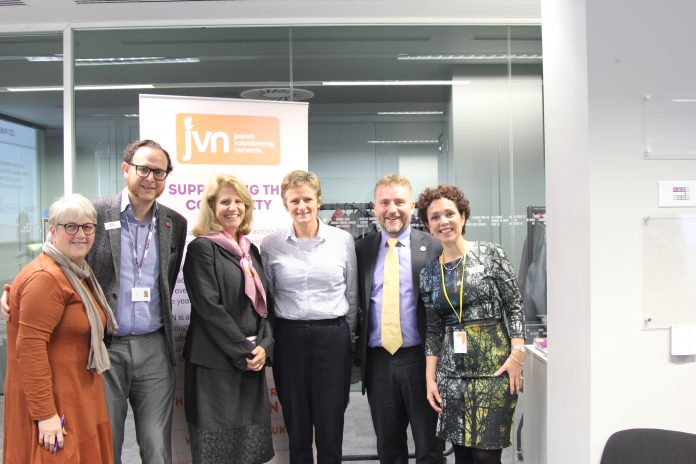 The Jewish Volunteering Network (JVN) held its 10th anniversary conference at the offices of ENGINE, in Great Portland Street, on Wednesday 8th November. Over 50 CEOs and volunteer managers of charities in the community attended a conference entitled ‘Building a Shared Vision Between CEOs and Volunteer Managers in Your Charity’ to discuss how CEOs and Volunteer Managers can work closer together for the benefit of their volunteers. Bev Jacobson, CEO of Kisharon, Ginny Lunn, CEO of Beanstalk and Raymond Simonson, CEO of JW3 conducted a roundtable discussion panel, while keynote speakers included Karl Wilding of the NCVO and Joe Saxton of nfpSynergy. The conference was the final event to mark JVN’s 10th Anniversary since its inception in 2007, following the hugely successful Volunteers’ Week campaign and Gala Dinner earlier in the year.
The CEO panel was interspersed with the keynote speakers and opened up the issues to the floor. They discussed the importance of effective volunteer training and the ‘correct’ position of the volunteer manager within a charity’s structure – a question to which many different answers were given. Volunteer managers continued with a debate on current ‘hot topics’ in their field, including the relationships between fundraising and volunteering, engaging young people as volunteers and the question of how to motivate volunteers.
Lia Bogod, JVN’s Head of Volunteering said, “Ultimately to conduct effective Volunteer Management the volunteer programme needs to be acknowledged and actioned throughout the organisation from the top down. What we want to achieve with the conference is to strengthen Volunteer Management and push it higher up each organisation’s agenda.”
Participant Brain Eisenberg from All Aboard Charity Shops said of his experience: “It was an excellent conference. It far exceeded my expectations and it occurred to me that one of the reasons it was so successful was that all the delegates were so open and frank about the challenges they faced. There was a general air of collective problem-solving.”
Karl Wilding’s presentation, entitled ‘The Changing Landscape of the Voluntary Sector and the Impact it has on its Organisations’, focussed in a large part on the increasingly important role of technology in a volunteer’s life. He told the audience: “When thinking about volunteer management, one needs to think far beyond the volunteer and take into account the trends and developments in society in general. Charities cannot afford to be left behind in the wake of changes and transformations that will ultimately dictate the future nature of volunteers and the lives they will lead.”
Joe Saxton’s address was equally well received. He concentrated on the importance of a charity’s branding of its volunteer programme in order to make it recognisable and enticing to as broad a section of the community as possible. Like any great product, great volunteer programmes show what the target volunteers want to do. Package it appealingly in a defined role and offer it to them in an easily accessible and flexible way. In a world where many similar charities are jostling for the same volunteers, a volunteer programme that stands out is crucial, and it is equally important to make the volunteer application process as straightforward and as easy as possible.