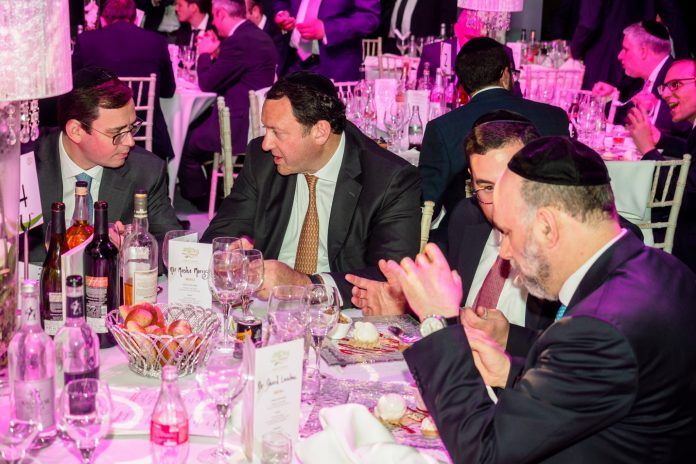 Mr and Mrs Paul Deacon hosted the Klal-Chazon first fundraising event marking almost two years of activity in the community. KlalChazon is a designed to strengthen those who are observant in their Judaism and prevent the religious Jews leaving the fold. Through classes and seminars, weekend retreats and trips abroad, Klal Chazon has developed a multi-faceted programme that caters for teenagers, teachers and parents. The programme focuses on clarifying the fundamentals of emunah, belief in G-d, and the best method by which to share them with today’s generation.
Attracting the support of leading rabbis and educators across the communities of London and Manchester, Klal-Chazon has in a very short time developed close partnerships with multiple high schools and communities. Since the summer before last their programmes have seen almost 11,500 attendances, 2,000 of whom are teachers who are in turn responsible for several hundred more students. The need for this highly respected organisation in today’s world was made apparent at their celebration by the attendance of many heads of local schools as well as Rav Yisroel Greenberg, a constant source of guidance for the organisation.
The evening was held in a beautiful open-air marquee. It began with a welcome by the dinner coordinator and master of ceremonies Mr Mendi Silber followed by some deep insights delivered by Klal Chazon’s education director Rabbi Yonason Roodyn. Mr Ronnie Joseph, captured the essence of the organisation and the bulk of their activities in his own inimitable way.
Rabbi Joey Grunfeld, a veteran leader of the outreach world, took to the podium to deliver the dinner’s keynote address. In a detailed and engaging analysis of the challenge of today’s youth abandoning their Judaism, Rabbi Grunfeld stressed the need to respond to children’s questions in an informal, non-judgmental setting. He made the point that it is so vital to give the young generation stirring experiences to nourish their souls whilst also giving them a safe forum within which they could express themselves freely and find answers to their most nagging issues. This, he said, is where Klal Chazon fits in, working in tandem with the more rigid, disciplinary school environment to provide that extra dimension a child might otherwise be lacking.
The guests were treated to a very powerful short film describing Klal Chazon’s impact on the youth and their teachers before hearing from the organisation’s director, Rabbi Shimshon Silkin, who compared teenagers today to the spies in last week’s parshah – they felt like small, insignificant grasshoppers lost in the long grass of Judaism. Quoting the Chofetz Chaim, he said, “If you think you’re a grasshopper, you’ll be a grasshopper.” It is our job to lift these youngsters up and remind them of their ability to become giants and of the pride they should feel in belonging to this special nation. Rabbi Silkin then asked the guests for their support and quipped, “Turn your grasshopper cheques into giant cheques.” A presentation was then made to Mr Mendi Silber for his tireless efforts in coordinating the dinner management almost on his own. People remarked how moving an event it had been, and this feeling was evident in the generous donations that poured in subsequently.