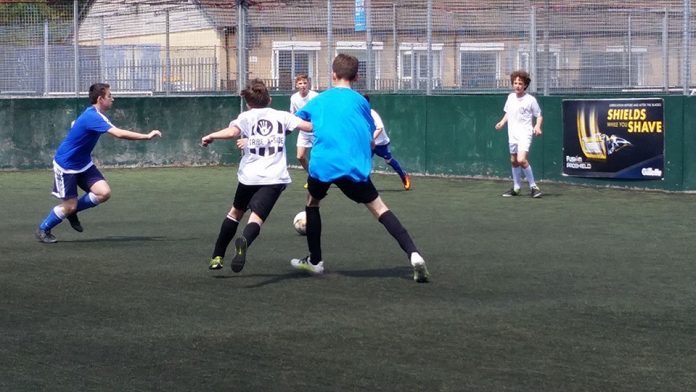 Last Sunday, over 65 children competed in Tribe’s annual five-a-side tournament at Powerleague in Mill Hill.
Participants competed with their friends and members from six different US shuls to be the crowned Tribe-A-Side 2017 champions.
Participants played in two separate tournaments: for those in school Years 7-8 and in 9-11.
With scores of goals throughout the afternoon, there were plenty of highlights, including Belmont being crowned eventual winners of the Years 7-8 tournament and the Mill Hill team winning the Years 9-11 competition.
Tribe’s Community Liaison Manager, Ben Vos, said: “Once again, the atmosphere at Tribe-A-Side was fantastic. This event always attracts lots of youth from across our United Synagogue communities to meet, compete and play some great football together.”
Participant Joel Freedman, winning captain for the Years 9-11 team, said: “The whole team played well, considering there were only five of us and the heat made it harder. We all worked hard and played the football we knew would work. No one gave up and everyone from the goalkeeper to the strikers knew what they had to do. It was a great tournament from all the boys.”