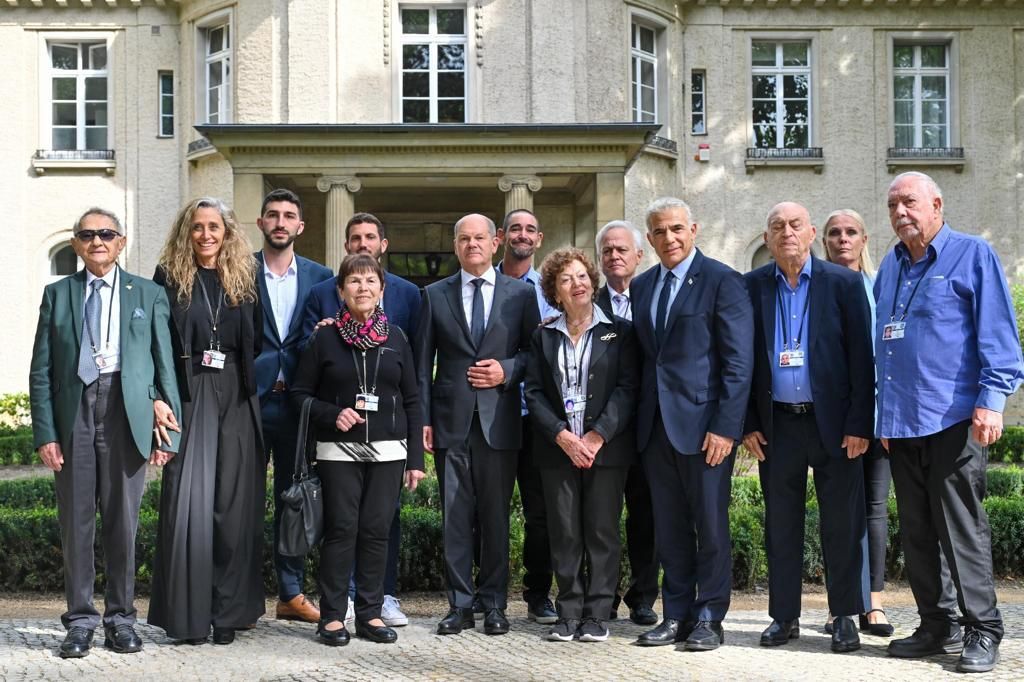 Scholz praised the courage of Pnina Katzir, Avraham Roth, Shoshana Treister, Yisrael Mila and Zvi Gil and their families for meeting him at a place where Nazi leaders planned the infamous ‘final solution’ of the Jews.

The German chancellor listened to chilling testimonies from the survivors.

Israel’s leader was on a state visit and said he was convinced that under Scjolz’ leadership Germany would fight antisemitism with zero tolerance.

The group of survivors expressed the importance of instilling the memory of the Holocaust in younger generations globally.

Lapid, the son of a Holocaust survivor, recalled a story about his father, Yosef Lapid, when he first saw a German soldier at the age of just 13 at the family home in Novi Sad, Yugoslavia in 1944. Lapid’s great-grandmother, Hermina, who spoke German, pleaded to a soldier for his grandfather, Bela. Tragically, he died in a concentration camp.

Lapid said, “My father survived, raised a family and they established a country. That country is proud to be here today.”

Lapid thanked Scholz for attending. “It takes a fair amount of moral courage to do so,” he said.

Addressing the survivors earlier in the day during a press briefing with Scholz, he said, “This is a moment of great victory for them. They survived, they established an independent and strong country. They return here with their heads held high as free people.”

“This visit concludes the final details of a strategic partnership agreement between Israel and Germany. It follows the strategic dialogue between our teams in Jerusalem. This partnership has economic and security benefits.”

Lapid continued, “Some will certainly say that a military partnership between Germany and Israel is a historical irony. I consider it to be proof that we have drawn the necessary conclusions from the past. Talk does not stop evil. Liberal democracies must be willing and able to defend themselves. Sometimes, freedom must be defended with force. Our partnership also requires us to act together against the growing threat of Iran becoming a nuclear state.”

Regarding the Iranian regime, he noted, “A nuclear Iran will destabilise the Middle East and create a nuclear arms race that will endanger the entire world. Returning to the nuclear agreement, under the current conditions, would be a critical mistake. Removing sanctions and pouring hundreds of billions of dollars into Iran will bring waves of terrorism, not only to the Middle East, but also across Europe.

“There is another way. A better way forward for the Middle East. It is the path of the Abraham Accords and the Negev Forum. A path based on a shared vision for the region. A vision not of war, extremism and terrorism but of peace, tolerance and cooperation.

“Our hand is outstretched for peace, with all our neighbours. And it always will be.”

Scholz said Iran must not be allowed to obtain nuclear weapons and European countries had made proposals. “We remain patient, but we also remain clear, Iran must be prevented from being able to deploy nuclear weapons,” he said.