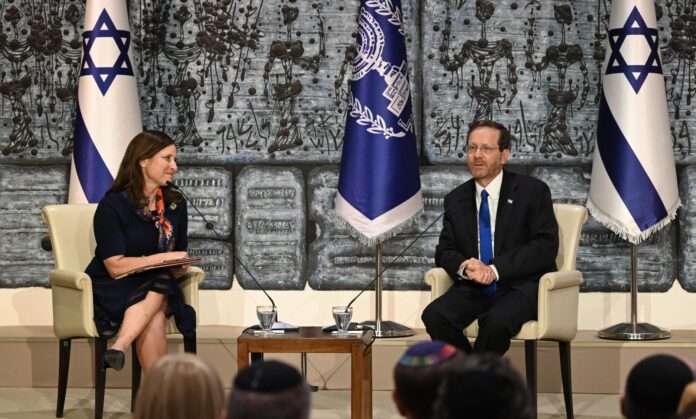 The Sacks family, including Lady Elaine and members of the Rabbi Sacks Legacy Trust board of governors attended.

“We will see Rabbi Sacks’ legacy growing from generation to generation, it will change the dialogue in the Jewish world,” said Herzog. “The real impact that Rabbi Sacks had on me is with the weekly reading of the Torah portion. I say so because I keep on reading his books, they are a fountain of strength, an unbelievable fountain of originality, of ideas, of understanding the content of the Bible, and of course with immense sources of wisdom, knowledge from all facets of humanity.”

Asked to share his predictions about Israel in the 21st century, Herzog said, “I truly believe that we should continue striving to great heights. For this we have to make sure that we stay together. We can definitely argue. Rabbi Sacks writes that Judaism encourages debate and argument. We should strive forward, together, and if we do that, we will reach great heights and we will move to become one of the greatest places on earth.”

Israeli singer-songwriter Ehud Banai performed “Canaanite Blues” and “Into the Light” in Rabbi Sacks’ memory in the Great Hall of the President’s Residence.

On the first anniversary of Rabbi Sacks’ passing, Herzog presented his posthumous Genesis Lifetime Achievement Award to Lady Elaine Sacks in a ceremony in London