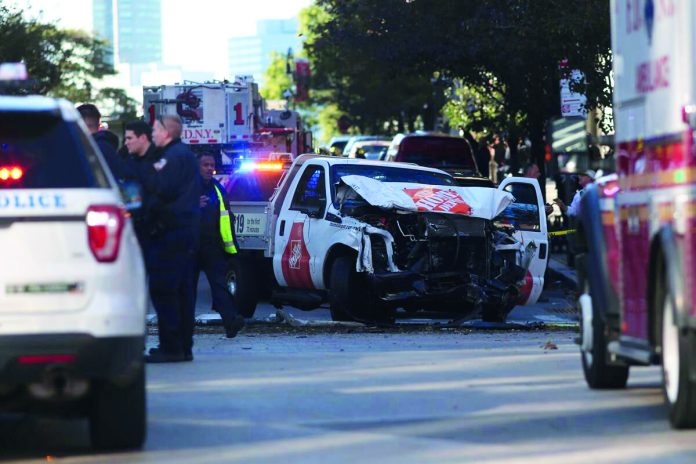 Eight victims have been killed in the Manhattan terror attack which occured on Tuesday afternoon.
Yeshiva World News (YWN) announced on Tuesday that one of the victims, Ariel Erlich, a 48-year-old Argentinian steel industry businessman, was believed to be Jewish. However on Wednesday evening, YWN confirmed that Erlich was in fact not Jewish.
Police shot the Uzbekistan suspect, named in the media as Sayfullo Saipov.
Saipov is in custody and has undergone surgery. He has now been charged with terrorism offences.
Israeli Prime Minister Benjamin Netanyahu following the carnage declared his solidarity with US President Donald Trump stating, “together we will defeat terrorism.”
President Trump was briefed in the White House about the deadliest atrocity to hit the city since the September 11 2001 ‘Twin Towers’ terror attack and instructed the Department of Homeland Security to “step up” the Extreme Vetting Program.
Turning to Twitter, he said, “We must not allow ISIS [Islamic State] to return, or enter, our country after defeating them in the Middle East and elsewhere. Enough!”
In another tweet, he noted, “In NYC, looks like another attack by a very sick and deranged person. Law enforcement is following this closely. NOT IN THE U.S.A.!”
Pope Francis condemned recent attacks in New York, Afghanistan and Somalia.
He said militants were abusing the name of G-d to justify their violence.
“I am profoundly saddened by the terrorist attacks in these recent days in Somalia, Afghanistan and yesterday in New York,” he stated in the media.
The Federal Bureau of Investigation has joined New York City police department to investigate the incident in which at least a further 12 people were injured.
The 29-year-old suspect, who came to the US on a diversity visa, ploughed down a bicycle path in a rented pick-up truck into pedestrians and cyclists in lower Manhattan.
Police say notes have been recovered from the scene claiming the attack was on behalf of the Islamic IS group.
Saipov has lived in the US since 2010 residing in Tampa, Florida and New Jersey.
Mr Erlich was among five Argentinians celebrating the 30th anniversary since graduating from the Polytechnic Institute of Rosario.
Uzbek President Shavkat Mirziyoyev offered help in a letter of condolence to Trump posted on his country’s Foreign Ministry’s website.
He condemned the attack as “extremely brutal”, noting there could be no justification for such violence.
“From our side, we are ready to use all our power and resources to cooperate in the investigation of this terrorist act,” Mirziyoyev penned.
“We express our solidarity with the US people.”
New York City Mayor Bill de Blasio described the Manhattan attack as a “cowardly act of terror aimed at innocent civilians.”
“This action was intended to break our spirit but New Yorkers are strong and resilient, our spirit will never be moved by an act of violence meant to intimidate us,” he said.
Prime Minister Theresa May said she was “appalled by what happened.”
Richard Verber, Board of Deputies Vice President, noted, “We stand in solidarity with all New Yorkers and remain firm in our resolve to defeat the scourge of global terrorism.”
“Our hearts go out to the people of New York following the heinous terrorist attack.”
NYPD Commissioner James O’Neill described the attack at a news briefing to the media.
The rented truck travelled along the West Street section of the West Side Highway, starting from Houston Street and ended in a collision with a school bus on Chambers Street, injuring four people on board.
The driver fled the truck holding two fake handguns before reportedly shouting “Allahu Akbar”; G-d is great in Arabic. Police shot the suspect.
A paintball gun and pellet gun were recovered at the scene.
The Argentine foreign ministry confirmed five friends from Rosario were among those killed.
A Belgium national was also among the fatalities; two victims have yet to be named.