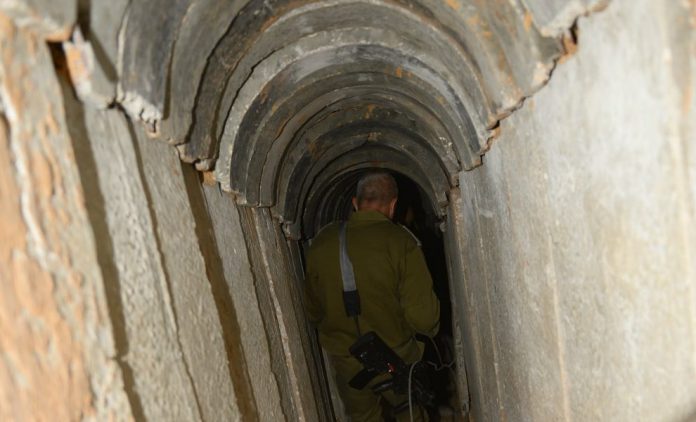 The Israel Defence Forces announced that they destroyed a tunnel being built to gain access to Israel from Gaza.
The tunnel, which could have been used to launch a terror attack, is thought to have started in Khan Younis.
The IDF asses that the tunnel was built after the 2014 conflict. The tunnel extended several metres into Israeli territory, ending a mile away from Kibbutz Kissufim. The IDF described it as a “grave and unacceptable violation of Israeli sovereignty”.
Following the destruction of the tunnel, it is reported that at least seven Palestinian operatives were killed and another 12 injured. Most of those killed apparently died in the rescue operation that followed the explosions that destroyed the tunnel. This makes it the deadliest incident since Operation Protective Edge in Summer 2014. The IDF clarified that the tunnel, not the operatives, were the target.
Israeli Prime Minister Benjamin Netanyahu said that new “breakthrough technology” gave the IDF the ability to locate the tunnel. In response to the incident, Hamas called the Israeli strike a “dangerous escalation against our people” and said it was “a desperate attempt to sabotage efforts to restore Palestinian unity”.
In a statement, Hamas said: “We affirm that resisting the occupation, in all its forms and through the use of various tools, is a natural and guaranteed right of our people.”
According to the Hamas-run Health Ministry in Gaza, four of the dead were Islamic Jihad members. This includes two senior commanders, Arafat Abu Murshad, Islamic Jihad’s central Gaza commander and his deputy Hassan Abu Hassanein. The other three were named as Ahmad Khalil Abu Armana, 25, Omar Nasar al-Fallit, 27, and Jihad Abdullah al-Samiri, 32. In addition, two Hamas members, Musbah Shabir, 30 and Mujahid Mohammed Marwan Algha, were killed during the rescue operation.
Islamic Jihad leader Khaled al-Batash threatened revenge against Israel and said: “This is a massacre… All our options are open. We will take all considerations into account, but we will not allow the enemy to set the rules of engagement.”
The IDF said it “does not intend to escalate the situation but stands prepared for a variety of scenarios.”