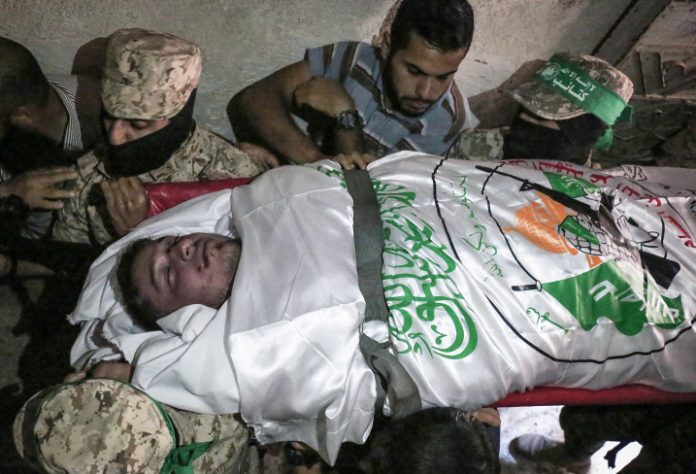 Hamas and Palestinian Islamic Jihad (PIJ) have vowed to retaliate and rebuild a tunnel into Israel in order to kidnap Israeli citizens after the IDF destroyed a tunnel earlier this week.
At least seven Palestinian operatives from Hamas and PIJ were killed and a further 12 injured after the IDF uncovered and destroyed a tunnel being built to gain access to Israel from Gaza.
Writing in Yediot Ahronot and citing a senior military source, Elior Levy says that “a rescue force entered the tunnel to extricate people trapped inside after being wounded in the blast and was hit by a secondary blast likely caused by the igniting of explosive materials inside”. The IDF Spokesperson seemed to confirm that the majority of the fatalities were incurred during the Palestinian rescue operation due to “side effects that occur in such situations in a tunnel, such as falling debris, smoke and dust”.
Funerals were held yesterday for the deceased Hamas and PIJ operatives, at which senior Islamic Jihad operatives committed to dig another tunnel into Israel for “kidnapping soldiers in order to free prisoners,” as PIJ operative Khaled al-Batsh said.
He added: “When you kill the sons of our people, then it is right to respond, blood for blood, we will continue to bear our arms, and we won’t let anyone take them away from us.”
Hamas political office head Ismail Haniyeh responded by saying that “the response to this massacre is to move forward toward the restoration of national unity”.
IDF Spokesperson Brigadier General Ronen Manelis sought to clarify that the operation had not been “a targeted assassination” and that the target had been the tunnel itself, not the operatives.
Education Minister Naftali Bennett said: “We must not apologise for the successful elimination of terrorists. These were terrorists who were digging a tunnel into Israel that was intended to kill Israeli women and children.” In response, Defence Minister Avigdor Lieberman rebuked Bennet, saying that “a briefing by the IDF Spokesperson should not be used as a pretext for a blatant attack on the IDF and its commanders”.