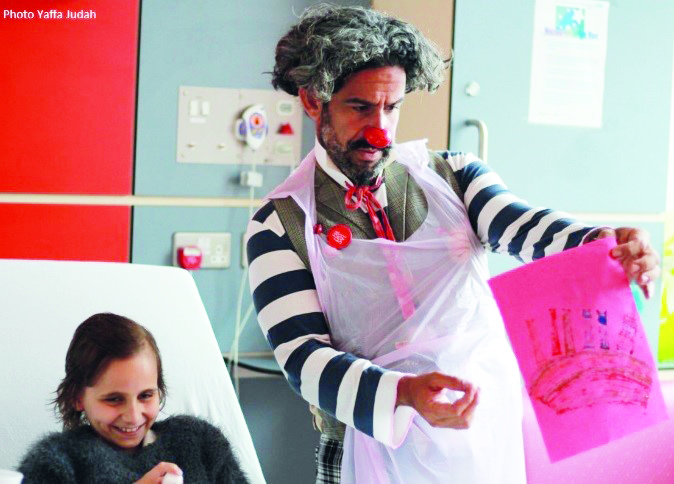 At Hadassah Hospital Jerusalem, since 2002 there has been an experimental development in para-medical personnel to use clowning methodology and techniques linked with medical and psychological training within a hospital setting, to create a new form of paediatric hospital para-medical assistance. “Medical Clowning”, is now used nationwide and is demanded by all the Heads of Paediatric Departments (29 hospitals with over 100 Medical Clowning specialist staff). This is “no laughing matter” but has developed into a serious medical tool allowing the medical staff in hospital to develop new techniques for paediatric hospitalisation.
Jerusalem Medical Clowning has three pre-requisites for its success;-
1. The Medical Clowns are viewed by all the staff at Hadassah as therapists and not entertainers.
2. The Medical Clowns are fully integrated into the paediatric medical teams and are instructed by the doctors.
3. The Medical Clowns are professionally trained not amateurs, having a full training up to degree level at Haifa University and are re-trained regularly.
Because of these conditions and the development of Medical Clowning in Israel over the last 15 years, it has now become an exceptional medical tool allowing completely new techniques to have be developed with doctors, nurses, para-medics and other therapists.
The clowns are also based in the UK aswell.
North Middlesex University Hospital is a district general hospital serving a multi-ethnic population in North East London. It serves some of the poorest boroughs within London and some of the adjacent areas are within the 5% most impoverished in the UK. It has two inpatient paediatric wards (total bed capacity 36, 4,000 admissions a year), a paediatric outpatients (13,000 patients a year), two assessment units (10, 000 patients a year) and a Paediatric A&E (50,000 patients a year.
They have shown that a medical clown decreases a child’s perception of pain whilst undergoing medical procedures, and increases the likelihood of successful MRI scans without sedation. In addition, there is evidence that clowns increase ward morale and also appear to give autonomy back to sick children.
Hadassah Hospital’s David ‘DuSH’ Barashi is coming to london this month to raise awareness and spread the positive story.