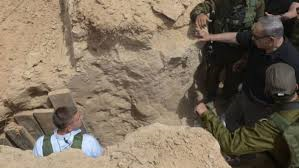 By Leon Symons
A long-awaited report by Israel’s state comptroller into the threat of Hamas’ attack tunnels ahead of the Gaza war in 2014 has launched fierce criticism of prime minister Binyamin Netanyahu and his office.
Other politicians, including former defence minister Moshe Ya’alon, and military leaders also come in for some scathing criticism about events leading up to and during the war with the terrorist organisation.
The report by Yosef Shapira also makes the claim that the combined effects of the various failings may have led to the unnecessary deaths of Israeli soldiers.
The war, named Operation Protective Edge, followed a major counter-terrorism operation after the kidnap and murder of three Israeli teenagers in June, 2014.
Hundreds of suspected terrorists were rounded up in the wake of the teenagers’ killing. As that happened, Hamas launched rocket strikes on southern Israel.
The Israeli cabinet gave the go-ahead for action to respond to the rockets. However, the threat posed by the tunnels, which the report says was underestimated, assumed greater importance. The IDF’s work now was to neutralise the tunnels.
Mr Shapira’s report says Mr Netanyahu failed to appraise ministers before hostilities began about the significant danger that could emerge from the tunnels, claiming that he waited until the war had started.
Mr Netanyahu has denied the accusations, asserting that he told ministers that the tunnels presented a strategic threat to the cabinet.
A considerable amount of the report’s contents have been leaked to the media, which in itself has caused another row. Education minister Naftali Bennett has been in the forefront of the critics of Mr Netanyahu, Mr Ya’alon and former IDF chief of staff Benny Gantz, who was in charge of the army during the war.
The three, together with current defence minister Avigdor Lieberman, have accused Mr Bennett of being the source of at least some of the leaks. He in turn received support from former justice minister Tzipi Livni and other cabinet ministers.
The IDF took its share of criticism, with Mr Shapira saying that there were significant gaps in military intelligence.
Mr Gantz responded by saying he would go to war again with the same intelligence as 2014.
The report has raked over coals that for many people are still burning hot.