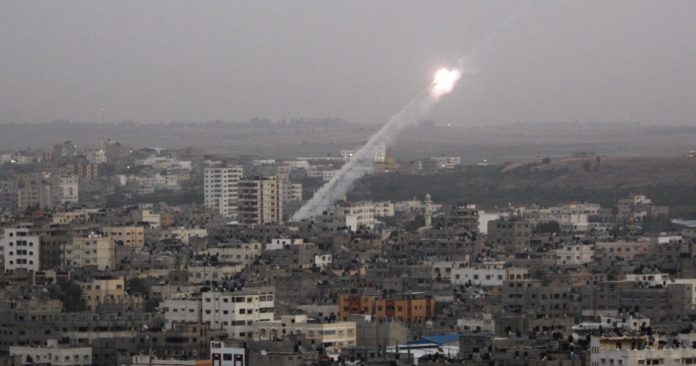 A missile was fired towards Ashkelon beach in southern Israel earlier this week as the recent wave of attacks from Gaza continued.
The missile landed in an open area, causing no injuries or damage. In response, the IDF targeted a Hamas military compound in the southern Gaza Strip, as Israel holds Hamas responsible as rulers of Gaza for all missile attacks emanating from the territory.
In total 12 missiles have been fired at Israel from Gaza in the last week, the highest concentration since the summer of 2014.
Earlier this week two members of Palestinian Islamic Jihad’s military wing, the Jerusalem Brigade, were killed when a missile they were carrying detonated prematurely as they rode a motorbike. The pair, who Islamic Jihad called “martyrs of preparation” in a statement, were initially falsely reported as being hit by an IAF strike.
According to Channel Two News, Islamic Jihad is responsible for the recent missile fire towards Sderot and not the smaller Salafi Jihadist groups who have carried out sporadic missile attacks over the last few months. The channel’s Arab Affairs expert Ohad Hemo also reported that more extreme elements of Hamas’s military wing are offering support to Islamic Jihad, while Iranian Revolutionary Guard General Qasam Soleimani offered the Hamas military wing “an open cheque” of support in their missile campaign against Israel.
In a related development earlier this week , a Palestinian suspected of attempting to damage the border fence near Ariel was shot and killed by the IDF. An IDF statement confirmed that the individual “placed his hand in his pocket and appeared to be drawing a knife,” though he was later discovered to be unarmed. The IDF will launch an inquiry into the shooting.
The IDF also arrested Hassan Yousef, one of the Hamas leaders in West Bank.