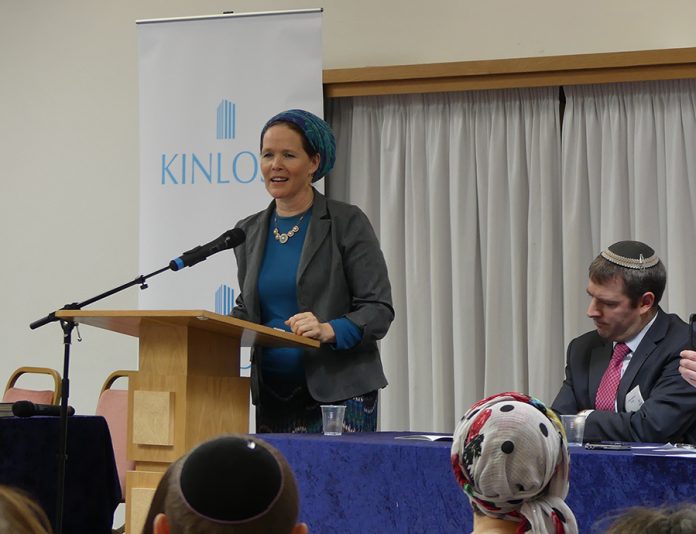 Last year, Rabbi Jeremy Lawrence of Finchley Synagogue, put on the first ‘Day of Inspiration,’ at Kinloss, in a joint venture with Mizrachi UK. A few months ago, Rabbi Lawrence approached Mizrachi UK CEO, Rabbi Andrew Shaw, and they began discussion aimed at making a quantum leap for this year’s event.

The idea revolved around bringing over several of the very best speakers from Israel, and sending them around the country over Shabbat, as well as a full days program at Kinloss.

And a full day it was, starting at 8.15 am with Shachrit, and culminating with Maariv at 10.30pm. In between, a great array of speakers were on offer, for the hundreds of people who attended throughout the day. The event was opened by Rabbi Doron Perez, CEO of Mizrachi World Movement, and Rabbi Lawrence.

Rachelle Fraenkel, whose son Naftali was one of the three boys who were tragically kidnapped and murdered in Israel in 2014, gave a powerful speech to end the morning session. Her talk entitled ‘Memory and Remembrance,’ highlighted how the Jewish festivals and laws take memories and turn them into present day experiences.

One such example is how the memory of leaving Egypt, has been turned into a constant living act of remembrance, through celebrating Pesach. She mentioned that at the Shiva of her son, someone remarked how the entire nation of Israel had not seen such public unity since the six-day war.

Other keynote speeches were given by Sephardi Chief Rabbi Joseph Dweck, Rabbi Benjy Leven, founder of world outreach organisation Gesher, Rabbi Daniel Stav, who is the Chief Rabbi of the town of Shoham.

Panel discussions on various topics were had throughout the day, including names such as Rabbi Taragin, from Yeshivat Hakotel, Rabbi Kanterovitz from Borehamwood, and Rabbi Laitner from the United Synagogue living and learning department.

Rabbi Lawrence gushed how he was proud that people had been exposed to “such a phenomenal range of top educators, containing some of the brains behind the leadership that shapes our very nation.”

Rabbi Shaw noted “how proud he was that over 3000 people had heard 13 top speakers at shuls across London and Manchester over Shabbat, culminating in the grand finale at Kinloss.”