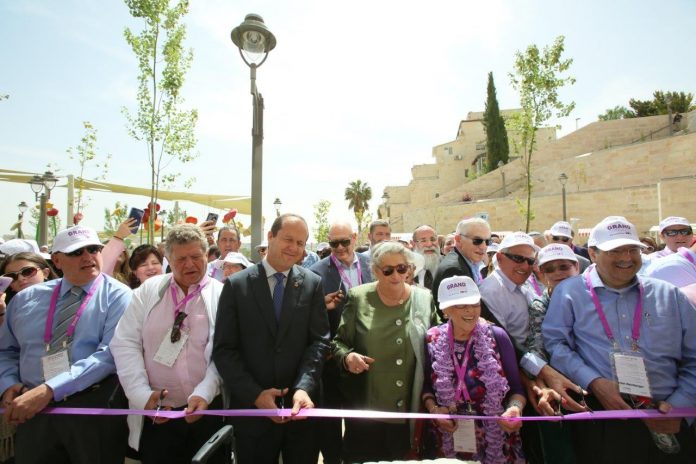 History was made last week when hundreds of friends and donors traveled from around the world to gather in Jerusalem to celebrate the much anticipated grand opening of the new Shalva National Center, home of love, of hope and human dignity.  The day began with a stirring rendition of “To Dream the Impossible Dream.”

“I fell in love with the concept that Shalva represents”, said Barkat. “It is an icon and a role model for the world. Shalva has shown innovation in dealing with children with disabilities and I believe it will create ripple effects around the world. ”

Leslie and Gordon Diamond, who dedicated the center, flew in from Vancouver, Canada with family and friends.  Also dedicated were the expansive Shalva Inclusive Parks in memory of Ambassador Ronald E. Arnall.

“Shalva epitomizes Tikkun Olam, making the world a better place and respect for family dignity. I am sure that Shalva will serve as the gold standard in its field for many years to come,” said Gordon. “For me and my family, it is an amazing honor to help this institution.”  Gordon continued, “Imperfection is inevitable in this world.  We cannot make this a perfect world. But this is where society can shine. There is no more shining model than Shalva.”

In the words of Chairman of Shalva, Avi Samuels, “we have built a center of excellence, full of color, a magical place for the children of Shalva.  We are humbled to open this state of the art facility.”

MK Chaim Katz said that “This is a huge day of giving. There’s so much heart and so much soul.  I am bursting with pride to know that these world class facilities are available right here in State of Israel.”

The ribbon-breaking ceremony began with the sounding of 10 extended shofars. Mayor Barkat exclaimed, “When people come to the city of Jerusalem, they ask me what they should see. I tell them to go see the City of David so they see their roots. And then I tell them to go and see Shalva. People who enter this center do not go out the same people. This place changes them.”

Kalman Samuels, who founded Shalva 27 years ago with his wife Malki when their infant son became blind and deaf following a faulty vaccination, emotionally thanked his audience of philanthropists, dignitaries and well-wishers, “your boundless love and your selfless care for your brothers and sisters with disabilities makes this earthly site heavenly.  I have gratitude to the Almighty and gratitude to each of you who continue to impact precious lives.”

The new center’s construction cost approximately $54,000,000 and houses some of Israel’s largest and most advanced disability accessible facilities including a 400 seat auditorium, semi-Olympic hydrotherapy pool and a fitness room with disability accessible equipment. The center’s cutting-edge therapy facilities have enabled Shalva to bring cutting-edge technology and therapy solutions to Israel for the first time.  Thousands of children with disabilities and their families participate in rehabilitative therapy, inclusive education, vocational training and recreational activities on a daily basis.  The new National Center is the largest and most advanced facility for children with disabilities in the world, and serves people with disabilities of all ages, religions and ethnicities free of charge. The Shalva National Center is a highlight for visitors and professionals from Israel and abroad.  Shalva regularly hosts international conferences on disability research. Inclusion is one of Shalva’s guiding principles, and as such the Shalva campus has Jerusalem’s first public inclusive playground with disability accessible installations, municipal inclusive preschools, in-house equal opportunity work settings and much more.

Shalva was founded 27 years ago in response to the personal experience of Malki and Kalman Samuels, whose son Yossi became blind, deaf and acutely hyperactive at the age of eleven months as the result of a faulty vaccination. Malki and Kalman, who received very little support from the paltry services available at the time, dedicated themselves to ensure that other families and children receive the help they need. Non Non denominational and free of charge, Shalva’s programs provide an all-encompassing range of services for thousands of individuals from infancy to adulthood. Through nearly three decades of award-winning programs, Shalva partners with government, academic and philanthropic institutions in advocacy efforts to create a more inclusive society.