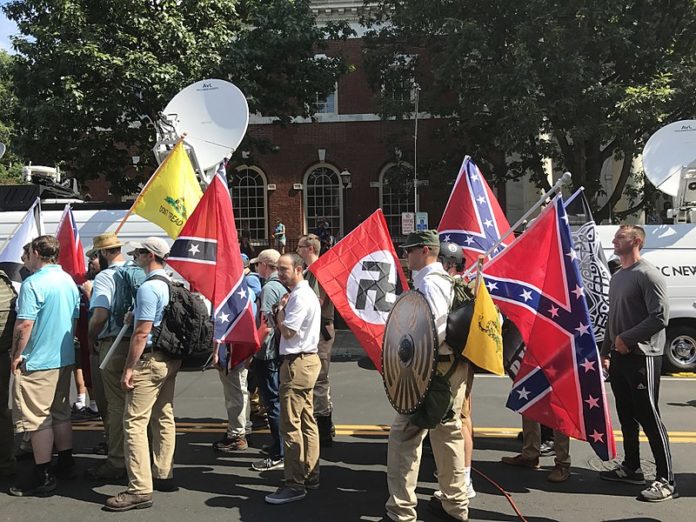 World Jewish Congress has condemned a neo-Nazi march in Washington on the first anniversary of violent events in Charlottseville at the weekend.

North America chair Evelyn Sommer said the gathering of racists and hatemongers on the anniversary of the deadly Charlottesville march was a disgrace and embarrassment to the United States as it undermined the principles of freedom and justice for all.
“This vulgar display of hate does nothing to ennoble America,” she said.

“It serves as a regression to the old hatreds espoused in days past, by the likes of notorious racists such as Father Coughlin and the Ku Klux Klan, that we had hoped would be moribund by this point.

“Shouting racist and anti-Semitic epithets with the primary intent to intimate others incites to violence and inevitably results in tragedy.”

Ms Sommer called on people of goodwill around the world to stand against hatred and extremism in order to fight for mutual respect and tolerance.

Across the Atlantic, WJC expressed concern over figures in Germany indicating a 10 percent increase in anti-Semitic incidents over the first six months of 2018 compared to the same period last year.
Escalating figures saw President of the Central Council of Jews in Germany and WJC Vice President Josef Schuster call for a nationwide system of reporting on anti-Semitism with a threshold to be used when evaluating suspected cases.

People with far right-wing tendencies were responsible for 349 out of 401 anti-Semitic incidents.

Berlin accounted for 80 incidents.
“The German government has demonstrated admirable commitment to combating anti-Semitism,” said President Ronald S. Lauder, who noted the appointment of Ambassador Felix Klein as the first federal government commissioner working on behalf of the Jewish community.

“Nevertheless, it is clear concerted efforts are needed to arrest the steady rise in violent incidents and harassment ensuring German Jews feel secure and valued as all German citizens deserve.”
He added, “WJC stands ready to assist our community in Germany, as well as all levels of government, to work toward implementing necessary steps to quell anti-Semitism across the country.”
Earlier this week, authorities confirmed that police are investigating two threatening letters containing white powder sent to the American Embassy (July 24) and Israeli Embassy (July 26) in Berlin last month.

A police statement noted experts had analysed the powder found to be a harmless substance.

Police are focusing efforts on a suspect as the sender of both letters on two counts of disturbing the peace by threatening a crime.

No arrests have been made but the enquiry is ongoing.

Neither embassy was available to comment on security issues.

The celebration was part of the Jewish Culture Days in Bukovina celebration.

WJC’s centre in Vilnius, since its inception in 2014, has provided dozens of courses to over 6,500 students around the world.

The organisation is committed to the preservation and critical study of Yiddish and culture reflecting on core roots in the development of modern Jewish history. CuLanguage in Czernowitz, Ukraine.

“Just 70 years ago we witnessed a severe decline in Yiddish within Jewish society and many believed the language and culture died along with the six million victims of the Holocaust said WJC vice President Robert Singer.

“It is encouraging and invigorating to be part of a renaissance of Yiddish and see it expand into the circles of the next generation of Jewish leaders.

“We must do everything possible to remember the millions of Yiddish-speaking Jews, preserve their language and culture, transfer their spiritual treasures to future generations and introduce these values into all systems of Jewish formal and informal education around the world.

“WJC is 100 percent committed to this endeavour.”

The location, Czernowitz, was the home of the first international Yiddish Language Conference, convened 110 years ago to deal with Yiddish in Jewish life.

Singer hails from Czernowitz and moved to Israel aged 15.

The conference featured presentations by scholars and researchers around the world who presented lectures and papers in Yiddish, English, Ukrainian and Russian.

Yiddish researchers and activists from Ukraine, Israel and other countries were also in attendance.

The program included Yiddish literature, theatre, cinema and journalism between 1908 and 2018, Yiddish language in the last century, during and after the Holocaust, in Israel, Chasidic circles, computer linguistics and as a living language in the 21st century.