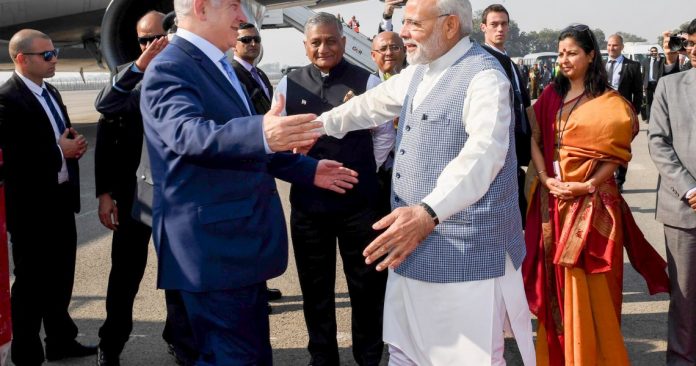 Prime Minister Benjamin Netanyahu and his wife Sara landed in India yesterday for a six-day visit.

Netanyahu was joined by a large delegation of 130 Israeli business figures as well as 12-year-old Moshe Holtzberg, whose parents were killed in the 2008 Mumbai terror attack. The visit marks 25 years since India and Israel established diplomatic relations and is the first time a sitting Israeli Prime Minister has visited India in 15 years.

Netanyahu was welcomed at New Delhi airport by Prime Minister Narendra Modi, who is the first Indian leader to visit Israel. Netanyahu said: “This gesture underscores the special link and the common history between Israel and India”.

Yesterday Netanyahu and Modi attended a ceremony at the Teen Murti Memorial in New Delhi to mark the renaming of Teen Murti Chowk as Teen Murti Haifa Chowk. The two leaders also laid a wreath and signed the visitor’s book at the memorial.

Netanyahu met yesterday with Indian External Affairs Minister Sushma Swaraj. Netanyahu said: “It’s a true honour and a true delight to be here. There’s a lot of enthusiasm, not only in our meetings at the level of governments and leaders, but also in the people. I see this and it’s heart-warming. So I want to thank you for this welcome, and I look forward to discussing with you how we can further improve our ties.”

In response, Swaraj said: “The feeling is mutual. We were eagerly looking forward to your visit and after the visit of Prime Minister Modi, all of us were very excited to receive you in India.”

During the visit the two countries plan to sign nine bilateral agreements in the fields of natural gas, cybersecurity and aviation. Work will also continue on the $500 million deal for India to buy anti-tank rockets from Rafael which India cancelled, but reports last week suggest may be agreed in the future.

Netanyahu will hold private discussions with Modi and Indian President Ram Nath Kovind. He is expected to also meet with Jewish community leaders and senior Bollywood figures as well as visit Gandhi’s tomb in Delhi and attend ceremonies in Mumbai in memory of the victims of the 2008 terrorist attack.