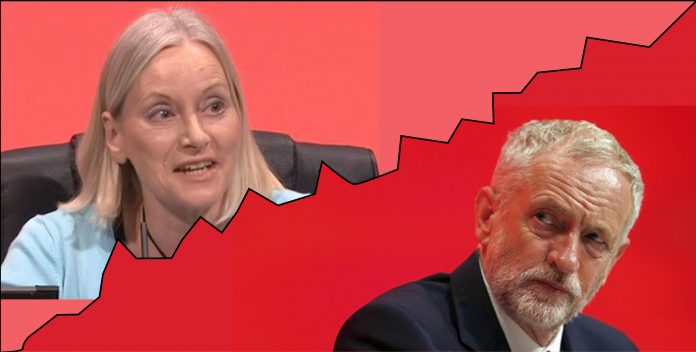 Having taking over Labour’s ruling National Executive Committee (NEC) this week, the “Jeremy Corbyn wing” wasted no time ousting the longstanding chair of the Disputes Sub-Committee, Ann Black and replaced her with the veteran left-winger Christine Shawcroft.

In a vote 22 to 15, the powerful Momentum-backed members of the NEC sent Ms Black packing because she was not “left-wing enough” for the Momentum faction even though she had been in the role for several years.

One NEC source told this journalist, “It was unprecedented for the left to put up a candidate against an experienced chair of the Disputes Panel, which is supposed to be a neutral body.” The source went on to say, “This move will take us back to party dis-unity and members will no longer have faith in the NEC to rule fairly on cases.”

Christine Shawcroft, who was herself suspended from the party for supporting the disgraced former mayor of Tower Hamlets, Lutfur Rahman, where she previously led the local Labour group, will now be responsible for the body that decides whether to investigate sexist, racist, homophobic and anti-Semitic abuse and other disciplinary cases.

The disputes committee immediately went into action after Shawcroft was elected, holding a lengthy meeting and voting on various allegations of misconduct by Labour members. The object was to decide whether to adopt or reject recommendations made by party officials.

This journalist has learned that three cases of alleged anti-Semitism were considered. In the first, the committee decided not to follow the recommendation of officers to refer the case to the National Constitutional Committee (NCC) for further investigation. Instead, a formal warning and anti-racism training were decided upon.

In another case, there was a discussion about whether the use of the word ‘Yid’ was a term of anti-Semitic abuse. The defendant had claimed there was nothing “intrinsically offensive” about the term and at least one member of the NEC agreed.

The third case was a formal investigation into alleged racism, bullying and harassment in Tower Hamlets that was deferred until March – a decision that was personally made by Shawcroft.

A majority of the committee disagreed, with one NEC member pointing out Shawcroft’s links to the last case. But the committee lacked the two-thirds majority needed to challenge the chair’s decision. The party member will therefore likely be free to stand in this May’s local elections.

In a statement, Shawcroft said, “There were several reports at the Disputes Committee, there were full debates on them all, some amendments were put and voted on, the recommendations were voted on, some were passed, some were amended.” Shawcroft also pointed out that nothing was overturned and that she didn’t vote on anything “because I have a casting vote – I don’t have the power to overturn anything anyway.”

The Disputes Committee will also be dealing with other notorious anti-Zionists, including Jackie Walker, Tony Greenstein, Marc Wadsworth and Ken Livingstone who have all been suspended from the party.

In the case with Livingston, a Jewish Labour Movement source said little progress had been made on the former London Mayor who claimed Hitler was a Zionist.

Meanwhile, the founder of Momentum, Jon Lansman, who was brought up in a religious Jewish home in North London, was elected to the NEC ruling body on Monday along with Yasmin Dar, a Manchester councillor and Rachel Garnham, a national policy forum representative. The far left won all three NEC positions for the first time in Labour’s 118-year-old history and now have full control of the party, which will likely bring about the re-selection of some MP’s and major rule changes in Labour.

Both Jon Lansman and fellow NEC member Rhea Wolfson have stressed there is no place in the party for anti-Semitism. But the Jewish community and others across Britain should be extremely concerned about Yasmin Dar appearing with the notorious anti-Zionist, Professor Rodney Shakespeare on stage.

Dar was asked to speak at a rally in March 2017 to celebrate the 38th anniversary of the Iranian Islamic revolution in Manchester where Shakespeare also appeared. However, the Professor is renowned for his conspiracy theories including the 9/11 attacks were a Zionist plot, the Zionist use fear-mongering to control the world and the Zionists control government and the media.

Yasmine Dar, 51, claimed she was unaware of Shakespeare’s views and condemned “the reprehensible comments” and “antisemitism in all its forms.”

Having now distanced herself from Shakespeare, the Jewish Labour Movement (JLM) this week asked Dar to clarify her position on the hard-line Iranian regime as she praised the Islamic Republic at the Manchester Islamic Centre and attends the event each year.