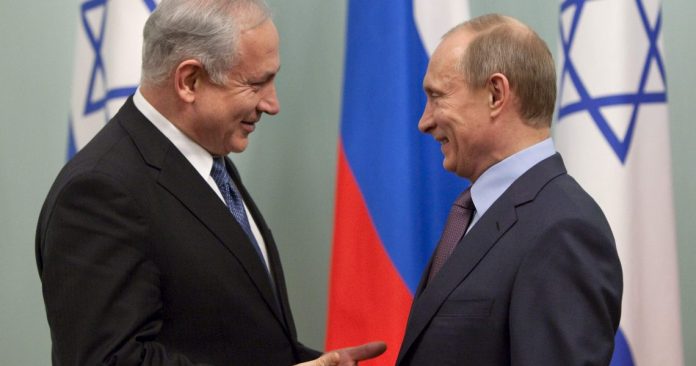 Israeli Prime Minister Benjamin Netanyahu met Russian President Vladimir Putin in Moscow earlier this week.
The meeting was the seventh between the two leaders in the last two and a half years. Netanyahu described the talks as “frank, very straightforward, in the positive sense of the word”.
After the meeting, Netanyahu said: “The question is: Does Iran entrench itself in Syria, or will this process be stopped. If it doesn’t stop by itself, we will stop it.”
He raised the issue of Lebanon with Putin and his fear that it “is becoming a factory for precision-guided missiles that threaten Israel. These missiles pose a grave threat to Israel, and we cannot accept this threat”. “I explained our policy. These are not idle words,” added Netanyahu. “The Russians understand our position, they understand well the significance that we give to these threats.” He acknowledged that he could not say the Russians “accepted” the Israeli position.
Writing in Maariv, Yossi Yehoshua reported that the Israeli delegation presented Putin with intelligence material from Lebanon showing that Iran was helping Hezbollah to convert regular missiles to accurate missiles — whose purpose is to hit strategic targets in Israel.
Yehoshua concludes that “Israel would prefer intervention by the international community to prevent the factories being built. We have to wait and see how Putin responds. Even if his means of pressuring Iran are limited, relative to Syria, he still has the power to influence the Iranians to calm the winds of war blowing from the direction of Lebanon”.
Commenting on the same issue yesterday, Defence Minister Avigdor Lieberman said: “I can make it clear that we are determined to prevent Iran from entrenching itself in Syria. We know about sites for building missiles, for converting missiles in Lebanon, and we know the figures involved in manufacturing these missiles… We are determined to stop Lebanon from becoming one large factory for manufacturing accurate missiles.”
Netanyahu and Putin also discussed the Iran nuclear deal, to which Russia is a signatory. Netanyahu said: “I raised our objections and also those I heard from US President [Donald] Trump. I can’t speak for the Russian position, but they understood that if certain changes weren’t made, it is very possible that the US would make good on its threat [to withdraw from the deal].”
Netanyahu was accompanied on the trip by a number of officials including National Security Council head Meir Ben Shabbat and Military Intelligence chief Maj. Gen. Herzl Halevi.