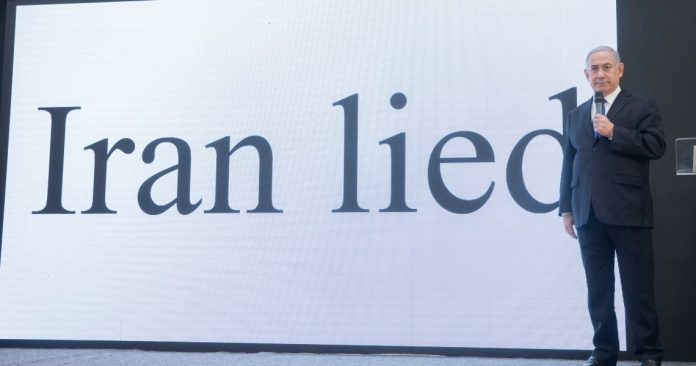 Prime Minister Binyamin Netanyahu accused Iran of deceiving world leaders about its nuclear weapons programme on a live Israeli TV broadcast on Monday night.
Addressing the nation and television networks around the world from Israel’s defence ministry in Tel Aviv, Netanyahu said his government had secured “half a ton” of secret Iranian documents.
Speaking in English, Netanyahu revealed Israel’s Mossad agents had retrieved 55,000 pages and another 55,000 files on 183 CDs containing incriminating documents, charts, presentations, blueprints, photos and videos from Iran’s nuclear archives with evidence about “Project Amad” to develop a weapon.
Whilst Iran maintains it only pursued nuclear aspirations, Bibi’s presentation told a different tale.
Standing in front of “half a ton of the material” he overviewed how the stolen documents were “new and conclusive proof” of Iran’s secret nuclear weapons program hidden for years from the international community.
Netanyahu, who cancelled a scheduled appearance in the Knesset for the address, overviewed how Iran had misled the world before signing the 2015 Joint Comprehensive Plan of Action (JCPOA) nuclear agreement to halt its nuclear energy programme in return for lifting of sanctions.
He then explained how Iran sought to expand its nuclear knowledge for future use.
Whilst Netanyahu provided no direct evidence Iran violated the 2015 agreement, the newly acquired documents were proof Iran could resume its nuclear programme.
“We can now prove that Project Amad was a comprehensive programme to design, build and test nuclear weapons,” he said.“We can also prove that Iran is secretly storing Project Amad material to use at a time of its choice to develop nuclear weapons.”
Netanyahu says he will share new data with allies and the international nuclear agency.
A senior Israeli official told theNew York Times the warehouse had been under surveillance since February 2016 and the raid took place in January 2018.
Netanyahu called on US President Donald Trump to walk away from a nuclear deal with Iran scheduled for next month.
A long-time critic of the deal when President Barack Obama negotiated it, he is concerned about safeguards in preventing Iran from reaching a nuclear weapons capability.
Trump had described the 2015 agreement as “the worst deal ever.”
Reacting to the news, Trump said the presentation showed he was “100 per cent right” about Iran, who “are not sitting back idly; they’re setting off missiles.”
The US President has given JCPOA signatories until 12th May to find solutions to “significant flaws” in the deal or the US will withdraw from the Agreement.
A White House statement accepted there were “new and compelling details” in Netanyahu’s material.
“These facts are consistent with what the United States has long know,” the statement noted.
“Iran has a robust, clandestine nuclear weapons programme that it has tried and failed to hide from the world and from its own people.”
US Secretary of State Mike Pompeo said evidence showed the JCPOA was built on Iran’s lies.
“Irans nuclear deception is inconsistent with Irans pledge in the nuclear deal that under no circumstances will Iran ever seek, develop, or acquire any nuclear weapons,” he said.
European powers are beginning to respond to the revelations.
Whilst it seems the UK is to keep to the Agreement, Germany has announced it will review the new information.
“We have never been naive about Iran and its nuclear intentions,” a UK government spokesperson said.
“That is why the IAEA inspection regime agreed as part of the Iran nuclear deal is one of the most extensive and robust in the history of international nuclear accords.”
EU Foreign Affairs High Representative Federica Mogherini noted that the International Atomic Energy Agency (IAEA) had published ten reports certifying Iran had fully complied with its commitments.
She added the agreement was not based on assumptions of good faith or trust, but on concrete commitments, verification mechanisms and a very strict monitoring of facts done by the IAEA.
Mogherini urged caution and stressed the IAEA needed to review the evidence, calling it “the only impartial, international organisation that is in charge of monitoring Iran’s nuclear commitments.”
Jewish bodies swiftly commented including the American Jewish Congress who were “very concerned” by emerging allegations.
“We remain concerned that the Iranian regime is growing bolder and more dangerous, with catastrophic potential consequences for the region and the world,” said AJC President, Jack Rosen. “While we opposed the Iran deal at the time we were happy to be proven wrong, but there are now worrying signs that Iran has been less than honest with the international community regarding its nuclear program.
“The 15-year period where the nuclear program can be resumed is fast approaching.
“As President Trump said, it is “not acceptable” that in seven years Iran would be free to pursue its nuclear program.
“The allegations by Prime Minister Netanyahu show that President Trump may have been right regarding this horrible agreement.
“As the expiry of the waiver on sanctions against the Iranian regime similarly draws near, the American Jewish Congress echoes Prime Minister Netanyahu in calling on President Trump to do the right thing for the US, the right thing for Israel and the right thing for the peace of the world.”