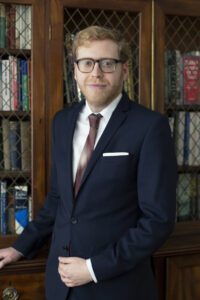 Jonathan Neumann is planning to challenge Marie van de Zyl to be President of the Board of Deputies in forthcoming elections at the Board.

The last incumbent President running for another term to face a contested election was in 1964, when Barnett Janner was defeated by Manchester’s Abraham Moss, who died a week later so did not assume the presidency.

Nomination papers have not yet gone out, Neumann needs 20 nominations to stand.

A charity lawyer by training, Neumann has been involved with a host of Jewish organisations, including the Board for seven years.

“I’m running for President in order to restore unity and enhance democracy at the Board, and to empower Deputies to make their contributions for the betterment of our community,” he said. “From my conversations Deputies are concerned about inclusion and accountability, with many feeling that these core values need to be strengthened. I will accomplish this by welcoming debate, increasing transparency and including Deputies in policy-making.”

Neumann added, “This is a transformative candidacy. I do not view my candidacy as a ‘challenge’, because I’m less interested in the past three years than in what we can achieve in the next three to six years, and that is what I want this positive campaign to be about.”

On hearing the news of Neumann’s prospective candidacy, Ms van de Zyl commented, “I will be standing for re-election on my record of service and accomplishments over the last six years as VP of Defence and President during one of the most tumultuous period of history for Anglo Jewry including both Jeremy Corbyn and now the pandemic.” She added, “Any deputy is of course free to stand against me and this underlines the truly democratic nature of the Board.”