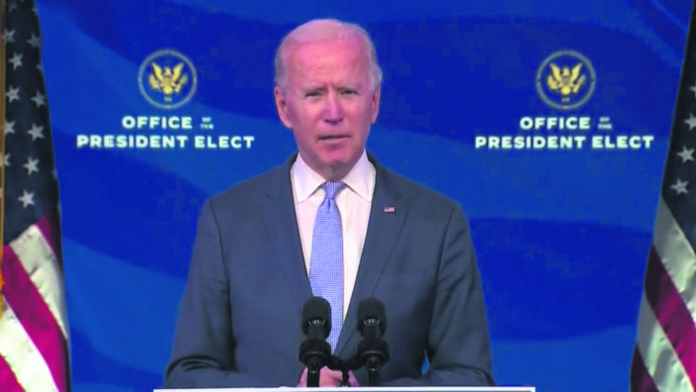 A new era dawns for Israel and world Jewry with Joe Biden’s inauguration as the 46th President of the United States.

Prime Minister Benjamin Netanyahu congratulated Biden and Vice President Kamala Harris on a “historic” inauguration in a brief video message. Netanyahu noted his decades-long friendship with Biden and looked ahead to further strengthen the Israel-US alliance, expand peace with Israel and Arab world and confront common challenges, chief among them the “threat posed by Iran”.

President Reuven Rivlin and Israeli Ambassador to the UN Danny Danon also noted the Iranian threat in messages to the new US president.

Rivlin invited Biden to Jerusalem “as soon as possible” as president. “The United States of America has no greater friend than the State of Israel,” he said.

Noting the Middle East was going through “rapid change”, he looked ahead to building “further bridges” with Palestinian neighbours whilst challenging the “rising threat of Iranian aggression and expansionism, anti-Semitism and global terrorism”.

Danon said Israel valued an “unbreakable relationship” with the US but “a nuclear Iran” was the “most pressing challenge” facing the region.

Danon called on Biden’s administration to apply “necessary pressure” on the Iranian regime.

Concerns persist over the administration’s view of the 2015 Iran nuclear deal signed by Barack Obama, even with strengthened conditions, which Biden is expected to resurrect.

Biden’s views on the Israeli-Palestinian conflict and building plans in Judea and Samaria may also be contentious.

Biden’s pick for Secretary of State, Antony Blinken, backed a two-state solution when questioned at his Senate confirmation this week. “The only way to ensure Israel’s future as a Jewish, democratic state and to give the Palestinians a state to which they are entitled is through the so-called two-state solution,” he said.

Blinken’s view is not shared by many Jews worldwide and in Israel who passionately believe the whole land of Israel is for the Jews.

Blinken confirmed the US Embassy move to Jerusalem and recognition of the city as Israel’s capital remained in place.

“Democracy has prevailed,” Biden said after taking the oath of office from Chief Justice John Roberts.

Biden called for unity and vowed to defeat political extremism, white supremacy and domestic terrorists. As for the global role, America would repair alliances.

Trump slipped away before the inauguration, the first president not to attend since 1869.

“Hopefully it’s not a long goodbye, we’ll see each other again,” he said on leaving the White House for as president, prior to addressing supporters at Joint Base Andrews.

Love or loathe Trump, the first US president to be impeached twice has made an impact, including standing up to North Korea, China, NATO, the EU and Iran. He oversaw cutting UNRWA funding in Gaza and closed the PLO office in Washington DC.

Regarding Israel, Trump’s legacy is immense. Moving the US Embassy to Jerusalem was seismic, he recognised the Golan Heights, Jewish communities in Judea and Samaria, whilst normalisation accords with UAE, Bahrain, Sudan, Morocco, Bhutan, Kosovo and Oman gained global recognition.

Trump though carries the can for the Capitol riots, inciting the far-right and failing to act quickly on numerous aspects of the Covid pandemic. The US Senate will attempt to end his political life but Trump is planning the next stage of his political story and did not leave quietly.

“The movement we started is only just beginning,” he said Tuesday. “We did what we came here to do and so much more,” he added.

Recalling his domestic and global achievements, Trump turned to Israel. “We recognised Jerusalem as the capital of Israel and recognised Israeli sovereignty over the Golan Heights,” he recalled. “As a result of our bold diplomacy and principled realism, we achieved a series of historic peace deals in the Middle East. Nobody believed it could happen. The Abraham Accords opened the doors to a future of peace and harmony, not violence and bloodshed. It is the dawn of a new Middle East, and we are bringing our soldiers home.”