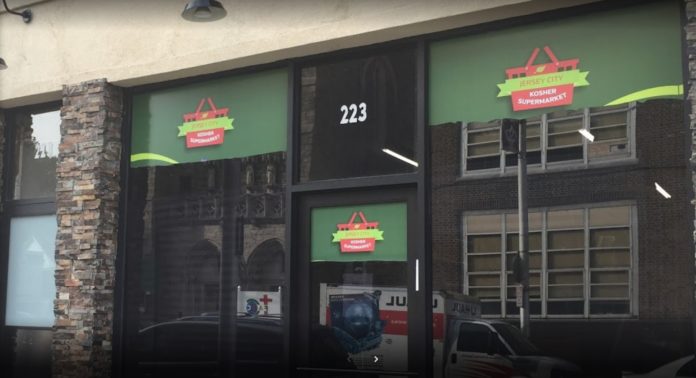 Federal investigators in the United States have revealed the New Jersey anti-Semitic attack at JC Kosher Supermarket last month could have been more devastating on the Jewish community.

Domestic terrorists David Anderson and Francine Graham killed three people inside the deli store in Jersey City on December 10th after murdering Detective Joseph Seals at a nearby cemetery, but the killers behind the attack had a bomb inside their U-Haul van that was capable of killing people half a mile away.

And there was material in the van that could have built a second bomb.

Authorities were unable to ascertain if the shooters were set to target other locations but they had researched a Jewish community center in Bayonne, under seven miles from Jersey City.

Leah Mindel was co-owner of the kosher deli in the heart of the Orthodox community with her husband.

Police killed the two gunman in a shootout before discovering the innocent victims inside the store.

The Jersey City attack was investigated as domestic terrorism with hate crime intent.

Authorities linked Anderson and Graham to the murder of a driver, Michael Rumberg in Bayonne three days before the shooting.

US lawyer Craig Carpenito confirmed authorities believe Detective Seals, who was investigating the perpetrators van in connection with Rumberger’s killing, delayed a “broader plan” by the couple that potentially “saved dozens if not more lives.”

“If it exploded in the right place it could have certainly injured or killed people up to five football fields away,” added FBI Newark Special Agent in Charge Gregory Ehrie.

It has since been established by officials that Anderson and Graham were not connected to a group, including the Black Hebrew Israelites. They did however survey the supermarket before the attack and drove past the location on the day of the atrocity.

Investigators said the attack was planned months in advance. Five firearms were purchased in March 2018, target practice took place with long guns just days before the attack, a vehicle being driven by a Chasidic Jew was shot at close to Newark Airport prior to Rumberger’s murder.

“This was nothing but a senseless, evil, cowardly act of anti-Semitism and hatred towards not just the Jewish community but law enforcement,” said US Attorney for New Jersey Craig Carpenito. “Anderson and Graham both targeted Jewish victims and law enforcement and we know now that they planned greater acts of mayhem on both communities.”

The incident began when Detective Seals met an informant at a cemetery a mile from the kosher supermarket. Spotting the U-Haul made him suspicious. When the detective investigated, Graham and Anderson opened fire.

After the shooting, Graham and Anderson drove and parked across the street from the supermarket.

Both entered the supermarket and killed their victims. One intended victim fled the scene.

Anderson and Graham fired hundreds of bullets from the supermarket at police officers before being killed in the ensuing gun battle. Both wore tactical gear. Authorities found firearms at the scene.

Local schools and shops were put on lockdown as a precaution while police blocked off the area during the incident.

Ehrie pointed out the difficulties in preventing such an type attack as Anderson and Graham were not known to law enforcement officers and were not members of an organisation or group.

“A lot of these individuals, like Anderson and Graham, are off the radar,” he explained. “They aren’t doing anything that would bring them to anybody’s attention, whether that’s by intent or whether that’s just by their lifestyles, and then just something goes and they commit to an act like this. That is very, very difficult.”

“There’s no organisation to look into,” Ehrie added. “There’s nobody to infiltrate. There’s no undercover work we can do. There’s no phone we can tap. There’s no anything, our usual techniques to get inside the minds of these people.”

Thousands attended the funerals of orthodox the Jewish victims.

He added, “This tragically confirms that a growing pattern of violent anti-Semitism has now turned into a crisis for our nation. And now this threat has reached the doorstep of New York City.

“History teaches us how dangerous it is to ignore this kind of hateful pattern. We must stop anti-Semitism aggressively and decisively, and I call upon all New Yorkers to join in rooting out this threat.”

Leah Mindel had relocated from Williamsburg to settle in Jersey City with her husband and ran the first kosher grocery store in the area.

Jewish leaders around the world have been shocked by the shooting.

Chabad organised a fund with Greenville Jewish community in memory of the victims which has to date raised over $1.5 million.

A bonus fund of $1.6 million has been added as the initial target was reached.