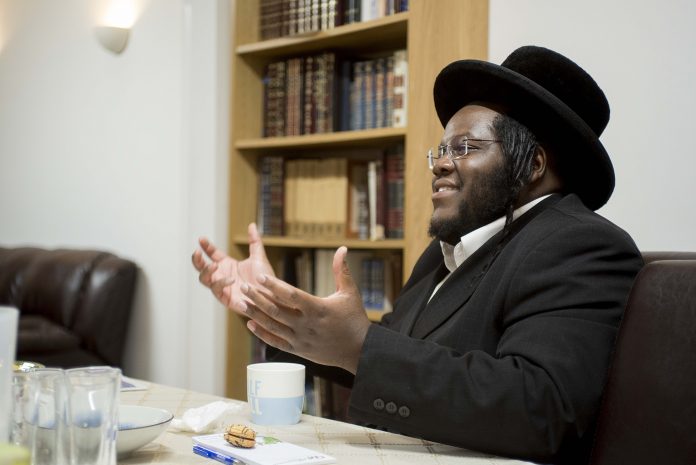 Publisher Yossi Saunders interviews world famous rap star Nissim Black, to get the inside view on his remarkable transformation from the gangs of Seattle to the streets of Mea Shearim.

You certainly have had an interesting journey! So how did it all begin?

I grew up in Seattle as a Sunni Muslim, in a house with lots of violence, where there were kilos of dope on the table, and bags full of marijuana. From the tender age of 9, I started smoking pot, and by 13, I was selling it. My parents were proud of the drug culture, and never hid anything from me. I knew it was technically illegal, yet I didn’t see it as abnormal since everyone around me was doing it.

I was also catapulted into gang life under the notorious Larry Hoover, who went on to serve six life sentences. I would walk around with a black bandanna hanging out of my pockets, and these were the type of groups I associated myself with in my early days.

When was the first time you started to see the extreme dangers of the drug world
and gang life?

When I was just 8, we were ‘battle rammed’ by the FBI, woken up with a loud boom at 6am, with a gun pointed at my face. Police were covering the front and back of the house, blocking all possible exits. This was just after President Clinton had declared a war on drugs.

My uncles were big drug lords at the time, and after they were arrested, I never saw them again until I was 17. To make matters worse, my mother died at 37 from a drug overdose when I was 19, and the saddest part is that she never got to see my 5 beautiful children, and my transformation into who I am today.

You then change from being a proud Sunni Muslim, to a born-again Christian. Not something you hear of every day…

I was just a “chemically imbalanced teenager” and by definition teenagers are always changing their minds from one day to the next!

In all seriousness, my arrival as a born-again Christian was my way of escaping the gang culture that nearly killed me. I was hanging out with some very dangerous people, and a rival nearly ended up killing me because he thought I was trying to kill him.

In addition, after signing my first big music contract at the age of just 13, my producers kept wanting me to change the words and lyrics, to ‘spice it up a bit,’ by adding in more curses and the like, and to enter into verbal battles with other rap stars.

I began to question what the real purpose of life was, and if my upbringing had all been a lie. This led me to change religion and I became so devout. I would read my Bible every day and was really into Christianity. I would go around preaching, trying to convert all my friends!

You had a major encounter with the police during this period of your life. Where did it lead you to?

I was meeting my friends for a game, and we saw loads of minivans surrounding the pitch. Their lights were all flashing, and suddenly the US Marshalls jumped out, guns in hand. The Marshalls are very high-ranking police officers, they haven’t showed up because we stole a candy bar! They had us surrounded, with all the guns aimed at us, as we had been travelling in my uncle’s car, who was in big trouble with the law, and it had flashed up on their system.

When they ran our ID’s, they saw I had an outstanding warrant from when I skipped court a few years previously, so I was arrested and spent 2 days in a juvenile centre. It was like an insane asylum with irrational teens being held down by guards, it was so crazy. But I went inside with such peace and confidence, into my small room, with just a Bible for company.

After spending the first night preaching G-d with other prisoners, my old mentor from the Christian club showed up to visit. “When he saw me, he burst out laughing. He laughed so hard, that I started laughing as well, as his laughter was so contagious.

Eventually I asked him what an earth he was laughing about? He told me that when he would take me home from club, and discuss G-d in the car, I used to tell him I longed for the time to quietly study all about G-d. Be careful what you wish for he told me! Look at you in here – you must be so specific with G-d!

What happened with the court case?

At the court hearing, the big, tall and imposing guards outside told me that they could see that I didn’t belong here, as there was too much of a shine coming from my face..!
I eventually got off as they threw out the case. My entire community showed up, and they had all written letters to the Judge and it was simply dismissed. After this incident, I joined a missionary trip to help build an orphanage in Mexico.

Would you say your years as a born-again Christian were crucial to your eventual arrival at Judaism?

Looking back, I would say this phase was crucial. I started to feel a tremendously deep connection with G-d during this time, and even though it was not Judaism, it was definitely a vitally important step on the right path to truly finding Hashem. Ultimately the force of spirituality I was engaging with, which was not yet the real truth, truly helped me to escape the big mess my life was in at the time.

Yet you were still not satisfied?

Something was missing. Christianity was simply not doing it for me anymore Looking back, I now see that Christianity was far too foggy, it had much less “seichel,”(intellect) than Judaism, and that the Torah is much more descriptive in regards to what takes place between man and Hashem.

I lived in a Jewish neighbourhood, and started asking lots of questions to my Rabbi; Rabbi Google. Not that I would recommend this to everyone, as there is a lot of incorrect information online. I first experimented with Messianic Judaism before the real thing, however, for me at the time, I still learned a lot.

I then started asking many questions to Rabbi Shmuel Brodie, who gave me Torah books to start upgrading my learning. I was specifically inspired by the Garden of Peace by Rabbi Shalom Arush, and the rest of this brilliant series. I kept talking to G-d, crying to him, asking so many questions. Eventually, I arrived at the truth. Reb Nachman did his fair share too.

Judaism allowed more true feelings to develop and gave me extra clarity and enabled me to have true inner peace.

How did you manage to persuade your wife to convert to Judaism too?

I sat down on a couch opposite her, to make sure there was space in case she threw something at me! She had seen me spending many hours researching, reading and crying, but she just thought I was going through a phase.

It was made even more tricky, as she naturally felt it was an attack on her entire family and a challenge to her entire Christian upbringing. And the fact that our first baby had been born the week before probably didn’t help either.

Baruch Hashem she saw the light with me. The whole conversion process took 2 and half years, and was extremely intense. I chose the name Nissim because of the many miracles that I saw.

I retired from music and moved to Israel, living in the Jerusalem neighbourhood Sha’arei Chesed, in the heart of Rechavia.

At the beginning, none of my family accepted my change, they all thought I was going mad, going crazy.

They were all very upset when I left music for a while; they saw it as a rejection of where I had come from.

After relaunching my music career under my new name Nissim, thank G-d everyone is just so proud of me. I have returned to singing again, and they have seen that I am using my talents, enjoying what I love and utilising Hashem’s gifts, they are so proud of who I am and who I have become. I am now a Breslov Chasid, yet I still produce great rap music.

And you now live in Mea Shearim –a far cry from the days of your youth!

Yes, I moved near the Mir Yeshiva, and every Friday night, we host many students at our home for dinner. My wife has a cut off of 50 guests, otherwise it becomes too much for her! I now use my music as kiruv and go around the world telling my story. Perhaps it doesn’t make as much money as rapping full time, yet I see it as my clear mission from Hashem to spread the light of Torah around the world, and to inspire people to change, no matter where they have come from.

What would your final message be to Jewish Weekly readers?

As a Breslover, you see at Reb Nachman’s kever (tomb) in Uman on Rosh Hashanah, all sorts of people who were the furthest away, people who were so incredibly far from Hashem. Yet, at some point they suddenly saw the light and returned.

No matter how far you may feel, you just need the desire and you can achieve great things. My story is truly miraculous, just like the story of Purim, and it has been a pleasure to share it with you. Wishing all Jewish Weekly readers a Happy Purim!

Nissim has a huge following on YouTube and his latest album ‘Lemala’ is available now on iTunes. Visit nissimofficial.com for more details