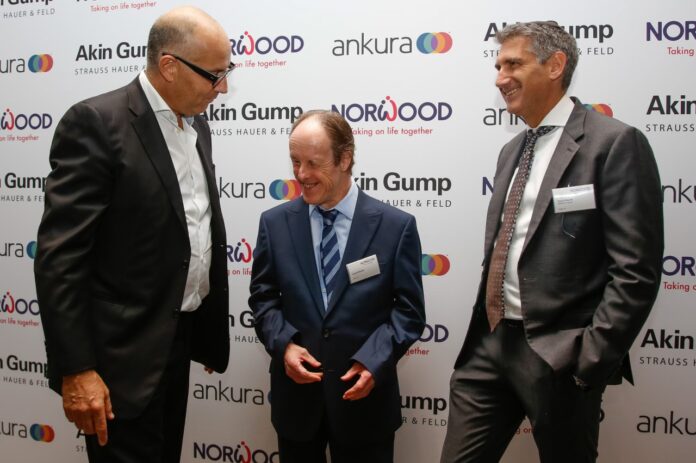 More than 230 supporters gathered for the annual Norwood Distressed Investing Dinner at the Grosvenor House Hotel in London on Monday evening. Members of the distressed investing community took the opportunity to network and hear insights from guest of honour The Rt Hon Michael Gove MP, as they raised £431,000 for the charity supporting people with learning disabilities and autism and children and their families facing challenges.

The 16th annual event was sponsored by our longstanding supporter Akin Gump Strauss Hauer & Feld – who have been instrumental to the event’s continued success. The dinner was Norwood’s first in-person corporate event to take place in 18 months, after last year’s event was postponed due to lockdown.

Welcoming guests to the event, Norwood Distressed Investing Committee member Gordon Singer spoke of his delight at the return of the industry calendar fixture, as he reminded attendees that their support was more vital than ever to secure “funds to provide vital and life-changing services to the thousands of people Norwood supports”.

Reiterating the urgent need for support ahead of a touching appeal for funds, Norwood Chair Neville Kahn added: “Over the last 18 months, we have been through the toughest of times, personally and professionally, and yet it is humbling to think that Norwood has continued to run and provide essential services to the most vulnerable through these times of uncertainty, with many staff putting their own health and safety at risk to support others.”

Speaking with Norwood resident Laurie Decker about the life-changing support he receives from Norwood, when he went to live in a Norwood residential service aged 46, Neville Kahn reflected that he was “proud to be called a second family to many; proud to have such a dedicated team that deliver life-changing support…proud to be raising awareness to our Distressed Investing community, and more importantly, raising vital funds”.

Elsewhere, The Rt Hon Michael Gove MP offered valuable industry insights in a fireside chat with Gordon Singer. Speaking on the role of charity in supporting the care of people with learning disabilities, the Secretary of State for Levelling Up, Housing & Communities and Minister for Intergovernmental Relations paid tribute to Norwood’s “unceasing commitment to caring for its community”. “The true testament to Norwood’s value is the way it enables the individuals it supports to live their most fulfilling lives and the trust the Jewish community places in it to be there for some of its most vulnerable members at every stage of their lives,” he added.

The evening came to a close with a special performance by ‘Master Mentalist’ Ben Hanlin, star of the award-winning ITV2 shows ‘Tricked’ and ‘Ben Hanlin’s Live & Deadly: Drowned’, which was generously sponsored by Ankura.