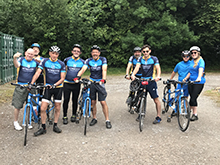 Pedal power won the day as four people, supported by Norwood, took on the 35-mile Wokingham Bikeathon on Sunday 25 June, riding tandem, in preparation for their upcoming cycle and trekking challenges in Israel.
Setting off from Norwood’s Ravenswood residential accommodation, the four tandem teams warmed up with a 3.3 mile ride to the bikeathon start line, where they joined 700 participants – taking on steep hills across the three-hour ride at speeds of up to 12 mph.
The tandem teams received fantastic support with spectators cheering them on. Norwood’s Sports Team Manager Andrea Ford noted, “It was a good opportunity for the people we support to do something locally and get that community support – and when people saw the teams riding tandem in their Norwood gear, there was such a positive reaction.”
Many of those taking part were using the bikeathon as training for their Norwood Challenges in Israel in October this year, where they’ll cover distances of up to 240 miles across five days.
Ian Tate, Norwood’s Head of Challenges, agreed that Sunday’s event was a good test for those in training, saying; “The people we support have taken part in our Challenges for the entire 25 years we’ve been running them – trekking and riding tandem. This year is no different, with several people we support taking on treks and cycles both in the UK and abroad. The Wokingham Bikeathon offers the perfect training opportunity for those joining us on our international Challenges in the autumn.”
All tandem teams finished the course in good time, picking up a well-deserved medal at the end. Julian, supported by Norwood, enjoyed the moment, saying, “It was really good. It was fun. We picked up the pace at the end, and we’re champions now. I’d definitely do this ride again.”