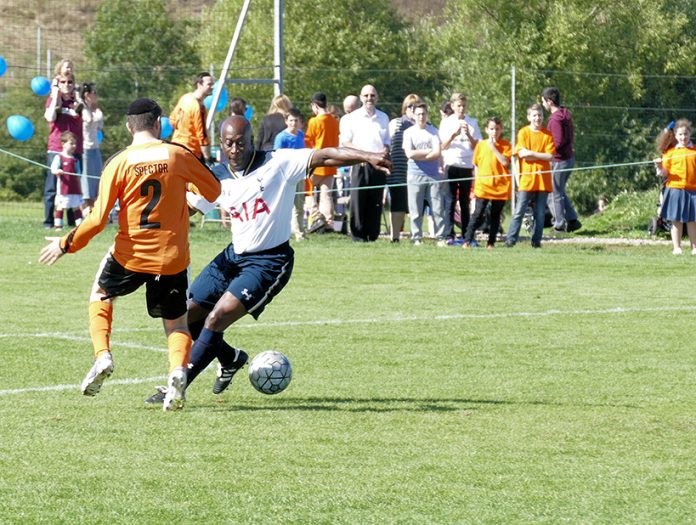 Following the popularity of last year’s match, Laniado UK is organising a Fun Day for the family on Sunday 9 July. The Spurs Legends may have been rather comfortable winners, but facing a new-look team, this time they are going to be up against a different challenge from the rabbis.
Last time round the Legends ran out comfortable 9-2 winners, yet the rabbis, representing communities and schools from across the UK, were far from humiliated. Their esteemed opponents featured former household names including Justin Edinburgh, Andy Sinton and Clive Wilson.
Rabbis are accepted into the squad on condition that they are football-mad, can play to a decent standard and are willing to raise money from students, family and friends.
Last year, Rabbi Eliyahu ‘Lollu’ Hibbert received the award for having raised the most money, over £2,500. Manchester’s Alex Nadler was voted man-of-the-match and Stanmore’s Rabbi Daniel Fine captained the side. All three are planning on playing again this year.
The event raised nearly £30,000 for Laniado and provided a great day out for families. Most funds are raised through on-line player sponsorship.
This year’s match will be held in Kingsbury and will feature various of attractions including a football tournament for kids after the match.
Player sponsorship can be found at https://www.justgiving.com/campaigns/charity/laniadouk/rabbisxi2017.
Founded in Netanya, Israel by the Klausenberger Rebbe z’l, Laniado serves nearly half a million residents in the Sharon region.
Funds raised go towards purchasing vital medical equipment for the hospital.