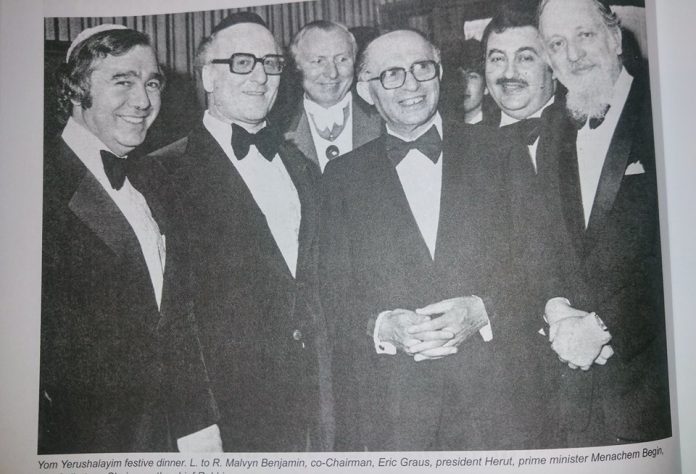 There’s many a spy story with a scene in a London street where the proprietor of an antiques shop is involved in a lot more than meets the eye. Eric Graus, who died last week at the age of 90, might have fitted well into that scene. President of Likud-Herut UK and the proud holder of the State of Israel Fighters Medal, his was an important life in Zionist history.

Eric was born in the Slovakian town of Bratislava. His family emigrated to England in 1939 where he soon became active in Zev Jabotinsky’s Zionist Revisionist Movement and in 1947 he joined the ranks of its associated underground movement. With the special role that was assigned to him in the critical months before independence, he developed a strong fealty to his commanders, Menachem Begin and Yitzchak Shamir, both future prime ministers of Israel.

As a young man Eric was introduced to the London antiques market and by 1952, he met and married Suzy Adler, a refugee from Budapest. Whilst raising a family he acquired an impeccable reputation for fairness and honesty in the antiques trade, from London to the far East, and soon moved up to a Bond Street address.

In April 1970, during a UK visit by Moshe Arens, Eric formed the British Herut Movement, with a manifesto to advocate for the settlement movement in Judea and Samaria and take the lead in activism on behalf of Soviet Jewry. Two years later he invited Begin (then opposition leader) for his first visit to London. This provoked universal outrage with Jewish MP Gerald Kaufman loudest in the calls to deny an entry visa to this ‘terrorist’. While Eric’s people managed to enlist the help of Hendon MP Peter Thomas to help clear the visa application, the Jewish establishment was not so easy. No United Synagogue or other communal organisation was willing to provide its premises for Begin’s welcoming dinner. It took a caterer with an Auschwitz tattoo, Mrs Lisser, to come forward and offer her ultra-orthodox Kedassia Restaurant in New Oxford Street in honour of Mr Begin. And so it was, as Eric fondly recalled so many times, that when Mr Begin later returned to London as prime minister, he insisted that only Mrs Lisser should have the honour of catering for him at Downing Street.

In the 1970s Eric and his comrades, Joe Gellert and Malvyn Benjamin, were at the forefront of activism against the Soviet Union for its imprisonment of Jews wanting to emigrate to Israel. From loudspeaker vans blasting protests outside the embassy, to mice being released at the Bolshoi Ballet and the picketing of Russian tourist offices, there was no peace for the Soviets in London. Eric was one of many protestors arrested for disorderly conduct and Malvyn’s lawyering skills were regularly called upon to get people bailed out.
Eric’s greatest joy was Likud’s surprise victory in the 1977 elections, bringing Menachem Begin to power after 30 years in opposition. He renamed his movement Likud-Herut and, as its president, he staged annual celebrations of Yom Yerushalayim which was his favourite yomtov of all. It was especially sweet that Eric lived just long enough to witness the historic and outspoken recognition of our eternal Jewish capital by the President of the United States.

Eric is survived by his dear wife Suzy, son Jeremy and two daughters Aviva and Nomy. He now rests in the land he loved and among the people he fought for in a very special way.
Yehi Zichron Baruch