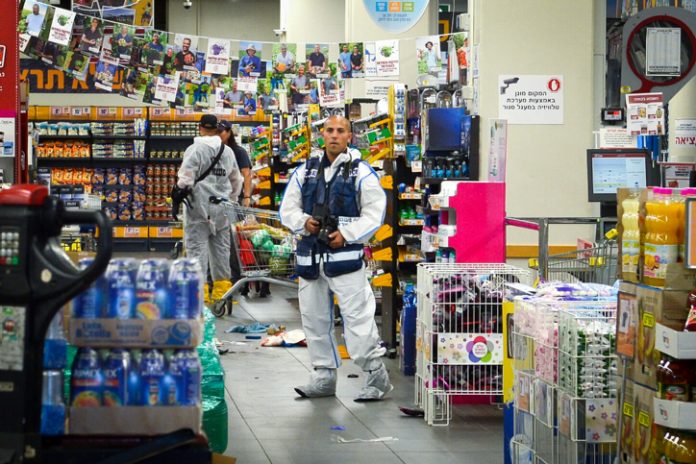 A supermarket employee is in critical condition after being stabbed by a Palestinian man in the town of Yavne yesterday.

The 42-year-old victim was stabbed repeatedly in the chest, neck and head. He was taken to the Kaplan Medical Center in Rehovot where he underwent surgery.

The attacker was named as 19 year old Ismail Ibrahim Ismail abu Aram from the West Bank village of Yatta. After questioning him, the Shin Bet revealed that he entered Israel illegally and was not known to the security services.

Police spokesman Superintendent Micky Rosenfeld said: “The Palestinian suspect came to a supermarket packed with people, and began stabbing the victim. We know there was no pre-existing relationship between the two whatsoever, so we confirmed it was a terrorist attack.”

Civilians present at the scene fought back against the attacker and subdued him.  One eye-witness told YNet: “I (heard) one of the employees call out “stop him, stop him.” Another civilian tripped him, and then he and the employee subdued the suspect.”

Another witness, Shlomo Brill, said: “My wife and I were shopping. All of a sudden, a man with a backpack and an Arabic accent approached me and asked me if I worked there.  I said no, and he kept walking. Ten minutes later, I heard screams from the checkout area.”

In related news, IDF guards at the Gush Junction identified a suspicious Palestinian female, who threw away a knife when soldiers went to apprehend her.

Yesterday’s attack is the latest in a wave of terror that has taken place since October 2015 in which 50 Israelis, a Palestinian man, two visiting Americans, an Eritrean man and a British student have been killed in stabbing, shooting and car ramming attacks.