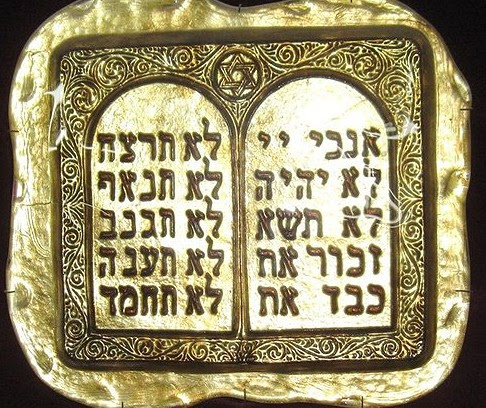 Though we use the phrase, “The Ten Commandments”, the Decalogue is ten Words or Principles. The first says that there is One God and He brought us from bondage to freedom.

After proclaiming His existence, why does He speak of His deeds?

Because the crucial thing is not just that He is, but that He has a relationship with the people of Israel and He acts within history. His deeds prove His power and confirm His nature. They show what He is capable of doing and indicate why He does it.

Without this information, we might have found it hard to be certain of His existence. As the Torah says in Parashat Ki Tissa (Ex. 33:19-20), we cannot see Him, but we can see His deeds: He is not visible or tangible, but He is powerful.

THEY SAW THE THUNDER

An array of noisy phenomena accompanied the Revelation on Mount Sinai. There was thunder. There was lightning (Ex. 20:15). But strangely, the thunder was seen and the lightning was heard, the opposite of what normally happens.

In the Mechilta, the rabbis draw our attention to what took place. They say, “They saw what is normally heard, and heard what is normally seen”. Both seeing and hearing are modes of sensory perception. The moment was so elevated that the experience transcended the usual way of the world.

If anyone had asked the Israelites to articulate what took place they would not have been able to give a straight answer. They would probably have said, “How did we know what occurred? We just knew!”

According to Ibn Ezra, their experience at the great moment was a miraculous combination of all their senses.

The priest of Midian who became Moses’ father-in-law had several names including Chovav. The most famous name he bore was Yitro.

The rabbinic sources think highly of Yitro and say that he was the first person to utter a benediction, a b’rachah in praise of the Israelite God. He had no doubts in his mind that HaShem was greater than any of the gods of the nations because his spiritual journey had taken him through many faiths and he recognised how unauthentic, inept and ineffective the other deities were. He acknowledged that HaShem was Melech HaOlam, the Ruler of the World.

There is a rabbinic view that when the Torah was revealed on Mount Sinai, Moses sent Yitro away somewhere so that he should not be embarrassed or put to shame by his earlier repudiation of the Divine Ruler.

Visit the OzTorah website for more insights on parashat Yitro.