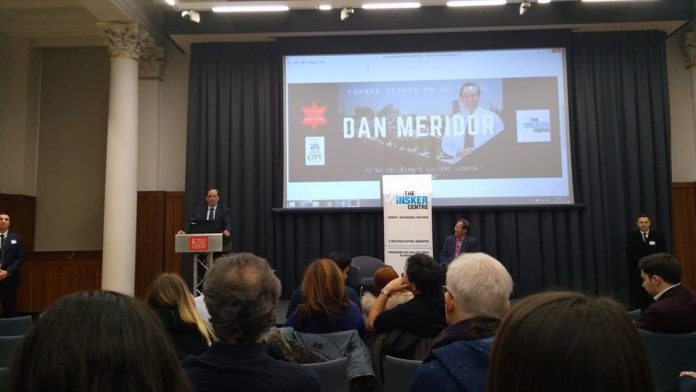 Jewish Students were once again subjected to intimidation and bully tactics from pro-Palestinian thugs on Monday night as they entered the Great Room at Kings College in London. The speaker was former Israeli Deputy Prime Minister, Dan Meridor, who was always on the left of the Likud Party and has been a staunch critic of Binyamin Netanyahu’s policies since he first became Prime Minister in 1996.

But even though Meridor spoke with a moderate voice about a two-state solution to about 50 participants in the room, the screams from outside the Great Hall were deafening. Avi Garson, who is an Israel Society committee member and Finance Officer said “It was annoying because you could hear them all the time and sometimes we could not even hear Dan Meridor speak.”

The Palestine Solidarity Campaign and other associated groups shouted “Shame” as well as their favourite, “Occupation No More, Israel is a Terrorist State” and the all-time hit, “Free Free Palestine.”

Mr Garson said Meridor was “brilliant” and he answered questions very well explaining the reality of the situation. There were however some hostile questions directed at Meridor, one associating Israel with the Nazis to which Meridor refused to even lower himself to such a claim. However, he did tackle the “Crimes against Humanity” issue and why the Palestinians still had not received a state from Israel. The answer to many including this writer who has been following the progress of negotiations since the Madrid talks of 1991 is because the Palestinians refuse to negotiate. But Meridor believes there can still be compromises made on both sides and it was clear that he had not given up hope.

The event was open to anyone who wished to attend by simply going online and booking a ticket for free. But around 50-60 demonstrators chose to stand outside the room, some with banners and signs saying “No to recognition,” which is easy for them because they live in the safety of London and the South East whilst the very Palestinians they claim to protect are being told not to recognise or make peace with any part of Israel.

An eye witness pointed out that although there were Kings College security guards present, one person was refused entry at the entrance to the college itself because he was carrying a megaphone. The eye witness who prefers not to be named said, “He kept shouting to the guards at the entrance that it was only because he was black he was being refused entry to the main college entrance.”

The individual identified is a notorious “dangerous” figure, said the witness named Ayo Olatunji who was born in Britain but comes from a Nigeria background. Olatunji is extremely active against Jewish society meetings and indeed was one of the leaders the UCL attack against Jewish students last year.

The Pinsker Centre who was responsible for bringing over Dan Meridor said “It remained dedicated to protecting academic dialogue and freedom of speech on campus.” The statement also pointed out that “Students should do all they can to stand up to threats and intimidation which aim to censor legitimate voices in campus discourse – and we will continue to endeavour to host discussions and debates with a range of voices, from across the political and social divide, in an effort to protect intellectual tolerance.”

Some Jewish and even non-Jewish students were verbally abused as they entered and exited the lecture hall. Cameras were aggressively thrust into their faces, violating their personal space and as they peacefully walked past the aggressive crowd.