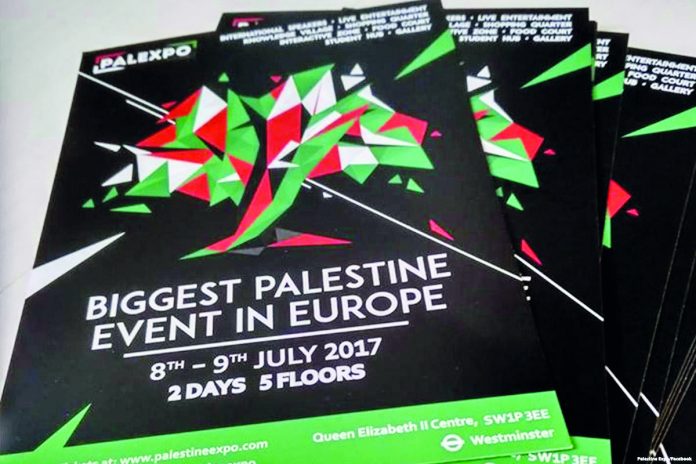 Despite originally threatening to cancel Palestinian Expo, a large festival run by people who claim Hamas is ‘no terrorist organisation,’ the government has now said it can go ahead.
Communities Secretary Sajid Javid had previously raised concerns that organisers of one of the largest Palestinian events in Europe may have links to the Hamas terrorist organisation in Gaza.

Palestinian Expo, which includes political discussions, concerts, comedy acts, workshops, a food court and other events, will run at the QE2 centre at the South Bank in London on the weekend of 8 and 9 July. The organisers are expecting to attract more than 10,000 people.
The Department for Communities and Local Government, which is responsible for the QE2 Centre, wrote to the organisers on 14 June saying the secretary of state, Sajid Javid, was considering terminating the contract. The letter cited “concerns that your organisation and those connected with it have expressed public support for a proscribed organisation, namely Hamas, and that you have supported events at which Hamas and Hezbollah – also proscribed – have been praised.”

The organisers, Friends of Al-Aqsa, wrote to the department complaining about the proposed ban. The department promised a decision by last Friday. But on Friday, with just a fortnight to the opening, the department expressed regret that a decision had not yet been made, saying Javid had been busy with other recent events, which was an apparent reference to the Grenfell Tower disaster.

Ismail Patel, founder of Friends of Al-Aqsa, had previously said that the department was unlawfully interfering in the event. “They have failed to provide any satisfactory reason as to why they have chosen to cancel an event which seeks to celebrate Palestinian culture and heritage,” he said. He accused the department of acting on hearsay from a pro-Israeli lobby group.

He added: “Despite the threat from Department for Communities and Local Government, we will make further efforts to hold Palestine Expo and will seek a judicial review of this unfair and unjust decision.”

Tickets for the event cost £20 each, and more than 2000 had been sold in the first few days. Since doubt was cast on the event, only a further 300 had been sold, although now they were expecting over 10,000 people to attend the organisers said.