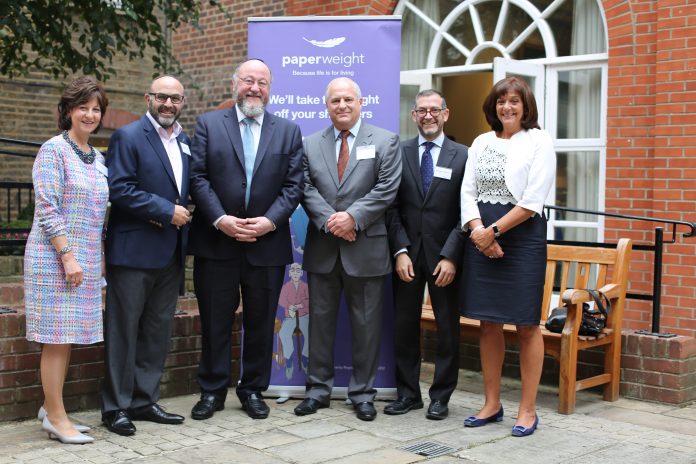 The Trustees of the Paperweight Trust hosted a summer buffet of cocktails and dinner in Maida Vale to celebrate the unsung heroes of the organisation, the volunteers who, as Benjamin Conway, a founder trustee described, “are the beating heart of our organisation.” The function was a show of gratitude to the volunteer force who have enabled the Paperweight Trust to grow such that it is in demand daily across London.
Paperweight provides a free-of-charge service across the entire London community, providing assistance with bureaucracy, debt management, family law, housing issues and much more. Their focus is on those in crisis caused by such life-changing episodes as bereavement, divorce and separation, the effects of aging and dementia.
Praising the work of the Paperweight Trust and directing his words at the hundred or so volunteers present, Patron Chief Rabbi Mirvis explained that the mitzvah of setting out to help others with no expectation of reward or recognition was acknowledged to be of the highest calibre and he cited Biblical examples.
Bayla Perrin, also a founder Trustee, introduced guest of honour Baroness Ros Altmann, former Minister of State for Pensions, whose own activities at state level mirror those of Paperweight, latterly including care funding for the elderly and the ongoing issues of pension misappropriation.
The Baroness, who met and exchanged views with many of the guests, described her work in the House of Lords and gave encouragement to the charity’s volunteers.