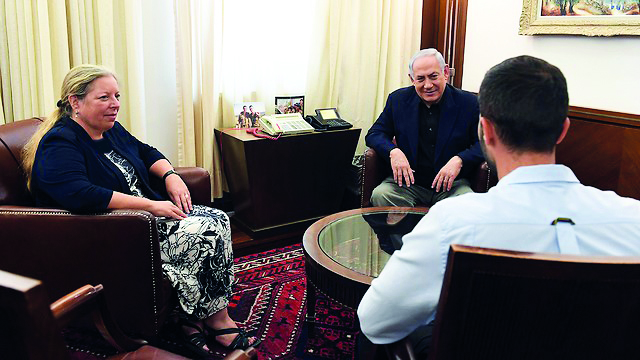 A day after securing the release of the Israeli guard who was stabbed in Amman, Prime Minister Benyamin Netanyahu met with Embassy staff and Ambassador Einat Schlein in Jerusalem on Tuesday.
The Israeli guard, known simply as “Ziv”, killed two Jordanians after being attacked and stabbed at the embassy in Amman. Immediately following the attack the embassy went on lockdown as Jordanian security officials demanded diplomatic staff hand over the guard for questioning.
“I am happy to see you here and that things ended the way they did. You acted well, calmly, and we also had an obligation to get you out. This was not even a question. It was only a question of time and I am pleased that it was short,” said Netanyahu.
Ziv thanked the Prime Minister for making every effort possible to get him and the other diplomatic staff out of the country in what became a volatile situation.
Ambassador to Jordan, Einat Schlein echoed Ziv’s sentiments and said: “It’s good to be home.”
Ziv was stabbed in the chest and back by a screwdriver-wielding terrorist near the embassy’s residential compound in Amman. Despite originally demanding to question Ziv, the Jordanian General Intelligence Directorate (GID) announced that it had completed all investigations into the incident.
According to the GID, an argument ensued between Ziv and Mohammed Zakariya al-Jawawdeh over furniture work that was not completed on time. The 17-year-old Jordanian then stabbed Ziv twice before the Israeli guard managed to shoot him.
In the struggle, the building landlord, a Jordanian physician, was struck with a stray bullet and later succumbed to his wounds.
Sources in both Jordan and Israel suggested the return of the security guard and the delegation to Israel was part of a deal between Netanyahu and King Abdullah, which included the removal of the metal detectors and cameras from the Temple Mount.
Following the release of the guard, members of the Jordanian parliament angrily chided the government and demanded a detailed account of the GID’s investigation into the incident. Several thousand Jordanians urged their government to close the Israeli embassy in Amman and scrap the unpopular peace treaty during the funeral of the young Jordanian shot dead by the Israeli security guard.
Dozens of demonstrators chanted: “No to an Israeli embassy or ambassador on Jordanian land,” and called for a jihad or holy struggle as they carried the coffin to his burial place in a cemetery in the capital. The family of the assailant demanded that the security guard stand trial and receive the death penalty.
Jawawdeh worked at his father’s furniture company and was delivering an order to the embassy last Sunday.
Israel worked throughout the day on various different channels to ensure that the stabbing attack of the Israeli security guard at the embassy and the death of the assailant and another man would not spiral out of control and poison relations. Shin Bet (Israel Security Agency) head Nadav Argaman travelled to Amman early Monday to hold talks with the Jordanians and returned in the afternoon to brief Netanyahu on the discussions. In addition, Jordan’s ambassador Walid Obeidat met with Foreign Ministry officials in Jerusalem who asked for his assistance in ending the crisis.
After hours of negotiations, during which the story was under censorship in Israel, the Jordanians refused to let the guard be transferred back to Israel. The Foreign Ministry said that according to the Vienna Convention that covers diplomatic relations, the guard has immunity from investigation and arrest. He, and the rest of the delegation were locked down in the compound and Israel would not let the Jordanians investigate the guard.
Jordanian police kept an angry crowd from approaching the heavily protected embassy in the affluent part of the capital and deployed dozens of anti-terrorism gendarmerie forces.
The attack at the embassy came just two days after thousands of demonstrators in Amman protested against Israel, chanting slogans such as “How beautiful it is to kill soldiers from Jerusalem.”
Netanyahu said that contacts are also being conducted on other tracks in order to bring the whole delegation home. He did not elaborate.