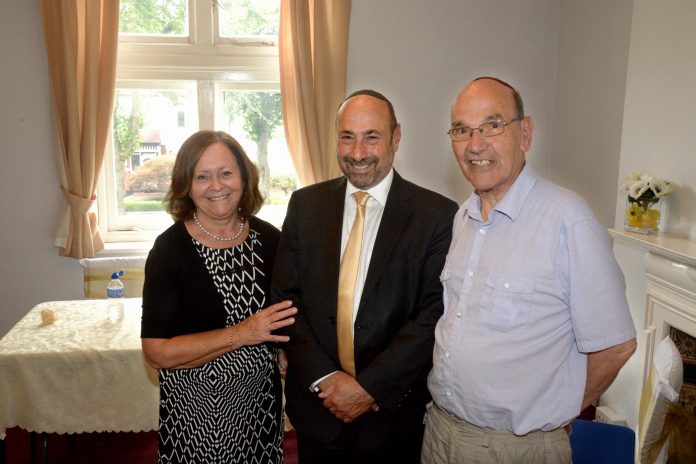 Isaac Sherman speaks with former United Synagogue President Stephen Pack, to look back on six years at the helm of one of the biggest shul bodies in the world, to get his perspective on current events, and to find out what his future plans are.

The bakery is packed on a busy Friday morning, with everyone carefully selecting the freshest looking challahs for Shabbat. However, for once on a Friday, I have a different agenda in mind.

I sip my coffee, sitting opposite former US president Stephen Pack. I am relishing the chance to gain a small insight into the mindset of a truly remarkable individual. After exchanging pleasantries with Stephen, and of course with half the shop who all seem to know him, he’s ready and we dive right in.

Stephen headed the committee that appointed Chief Rabbi Ephraim Mirvis and I start by asking him what it’s like to appoint a Chief Rabbi of the United Kingdom and Commonwealth, as there have only been ten people who have been tasked with the job previously.

“We interviewed many candidates,” he tells me. “We had people from far and wide, not just British Rabbis. But we found the best man for the job and that was simply what we were looking for. He has clearly proven in the last few years that he is the undisputed leader of Anglo Jewry.

“He has made the effort to visit synagogues across the commonwealth, with shuls across the globe featuring in his well-stamped passport.”

Stephen tells me that “the way the Chief Rabbi handled the recent Rabbi Dweck affair was amazing. At first, when trouble began to brew, we decided to leave it to the S&P to deal with, as we felt it was under their banner and not ours. However, as the furore grew each day, it quickly became very clear that there was only one man in the entire world that could sort it out and that was Rabbi Mirvis.

The most important thing is peace, and after the Sephardi Chief Rabbi of Israel wrote to him on 29th June asking him to resolve the issues in a manner he deems appropriate, that was exactly what unfolded. It took a few weeks and the press enjoyed all the hype surrounding the difficult situation, but he got it right and allowed all parties to save face and move on.”

Not many people can claim to have worked closely with two Chief Rabbis, and President of the US is a unique position. I enquire what his current relationships with Rabbi Sacks is like and he replies that he is still on “hugging terms.” Stephen tells me that the more Rabbi Sacks travels, the more he sees just how much the United Synagogue model is envied around the world.

“Our model is uniquely special. Because all the shuls are tied together under one influence, a central body of trustees that supports all the Rabbis, Cantors and various other professionals, everyone buys in to the same system and follows the lead coming out of head office and the Court of the Chief Rabbi. Our London Beth Din Dayanim are amazing individuals, who are extremely well grounded and conduct Halacha in the most applicable way possible to appeal to the masses. Of course they cannot ignore Torah law and certain occasions demand stringency, yet wherever they can be flexible, or push the boundary out within the letter of Jewish law, they do.

“An excellent example of this is the recent news that Warburtons has become kosher, joining the likes of Hovis and Kingsmill, in allowing Jews the widest possible range of kosher food. In fact, KLBD do road shows to show their products and any interested synagogue, organisation or individual can enquire by filling out a form on their website www.kosher.org.uk”

Talking about the Beth Din and boundaries leads me on to my next question. People sometimes claim that the United Synagogue leans too far to the left regarding Halachic boundaries and I ask Stephen what his response would be to this claim.

“The US has always held by its core values, namely authentic Orthodox Judaism, being inclusive and providing a popular environment for all ages. Our authenticity is the fact the we provide synagogues where people feel comfortable to join and attend. Most of our members would classify themselves as traditional Jews, who wouldn’t feel comfortable anywhere else.

So in answer to the question, we welcome everyone because it is the right thing to do. We don’t turn Jews away. Of course, we have to be more accepting than “frummer” shuls, or we will lose many Jews to assimilation, like we have sadly seen in America, where an estimated 20 million Jews have been lost to assimilation since the Holocaust. The Chief Rabbi has his red line which we will never cross, but within that line all are welcome.”
I wonder aloud if the United Synagogue is perhaps a victim of its own success, with people growing religiously due to the influence of the US programmes and then becoming more affiliated with “the right” and ultimately moving on from the United Synagogue. Stephen reassures me this is not a problem.

“We have recently welcomed shuls such as Magen Avot and Ahavas Yisrael, so clearly we are providing for the right as well. Every Jew and shul can potentially become a part of the US if they want, no matter where they place themselves. Even within each individual synagogue, we have different options for different people, with some preferring the quicker, happy-clappy services, others opting for the earlier Haskamah services and many still loyal to the traditional 9.15 main shul service, so as you can see, we provide for everyone.”
The rest of our time sees us discuss various issues, such as the recent strategic review. Stephen says that despite the numbers showing a drop in shul attendance, the “real” numbers show an improvement under his leadership. In his opinion, the JPR report painted a great picture for the media, but in actual fact the US is not haemorrhaging at all; on the contrary, it is extremely healthy. The total number of Jewish households has dropped 20% in the last thirty years, down from 340,000 to 270,000. Therefore, as a percentage of total households, we have only dropped 7% in the last ten years, a very great achievement given the 13% growth of the strictly Orthodox community.

Several new communities joined the US under Stephen’s leadership, in addition to the two which have already been mentioned. They are Sheffield, Birmingham, Boundry Road and are shortly to be joined by Mill Hill East and Hatfield. This clearly shows how strong the US is, and how much has been achieved in his term in office.

We cannot end without mention of the fact that behind every great man is an even greater woman, and Stephen glows as he recalls the dedication of his wife Cheryl, who has accompanied him to virtually every single event. In his own words: “I couldn’t have done it without her help and she really deserves a medal! Perhaps a well-deserved slot in the Jewish Weekly’s famed ‘Woman of Worth’ section!”

Before we depart, I felt that I must ask Stephen what his future plans are. After wishing his successor Michael Goldstein the very best of luck in his new role, he tells me that he will enjoy spending more time with his grandchildren, but I am not surprised when he tells me that his intention is to work with several charities, using his experience to help them reach other communities.

So no rest then! Perhaps a nice holiday abroad Stephen? I think you and Cheryl certainly deserve one.