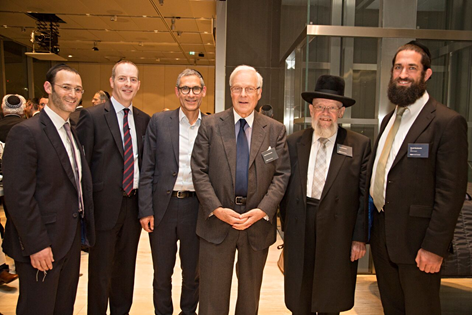 Professionals’ Beis Hamedrash (PBM) held an exclusive event at Rothschild Bank in the City last week, attracting around 100 guests. The main speakers were Dayan Chanoch Ehrentreu and Ian Paul Livingston, Lord Livingston of Parkhead.
Lord Livingston was the former CEO of BT Group plc, a previous Minister of Trade and Investment under David Cameron, and now serves as chairman of Dixons Carphone and the Mann group, as well as being a trustee of Jewish Care.
Set up in South Africa by South African Chief Rabbi Dr Warren Goldstein, PBM is suitable for those who are just starting out or who would like to build on existing skills. There are multiple tracks of shiurim tailored to meet the specific requirements of participants.
PBM also offers courses on Mishnah, Parshah, Business case- studies, Prayer and Hebrew grammar. Each session focuses on a short piece of text introduced by relevant background information followed by an opportunity to study the text with a partner.
The sessions end with a recap and summary of what was covered during partner study time. An emphasis is placed on the skills and methodology that can be learned from the text covered in that session.
Last week, after the learning sessions were finished, Dayan Ehrentreu gave an in depth analysis on a Talmudical piece discussing contractual relationships. The Dayan’s shiur was a perfect example of the packaged learning that PBM has excelled in and become famous for.
Paul Mann then interviewed Lord Livingston in true Paxman style. Paul, from Credo Wealth Management, manages a variety of clients, comprised of individuals, pension schemes, and Family Offices. A qualified lawyer, with a background in Investment Banking since 1997, he quizzed Lord Livingston on all manner of subjects ranging from his time at BT, the phone call from the former Prime Minister that led him into government, and his current positions with Dixons.
The audience enjoyed hearing about his career high. On his last day at BT, his wife rang him to ask him to look up at the BT tower as he left for the last time, and he saw a goodbye message at the top of the iconic tower, wishing him good luck for the future. When asked what the most important asset in any business is, the firm answer was ‘people,’ and the importance of having the right staff around you.
The event, held in the Sky Pavilion of the bank, with stunning views of The City in the background, was catered by James A Zimmer complete with an open bar. Overall, the business ethics and networking event was a shining example of how big business and Judaism can function side by side. More info of future events can be found at www.pbmuk.org or phone 07533 874 623.