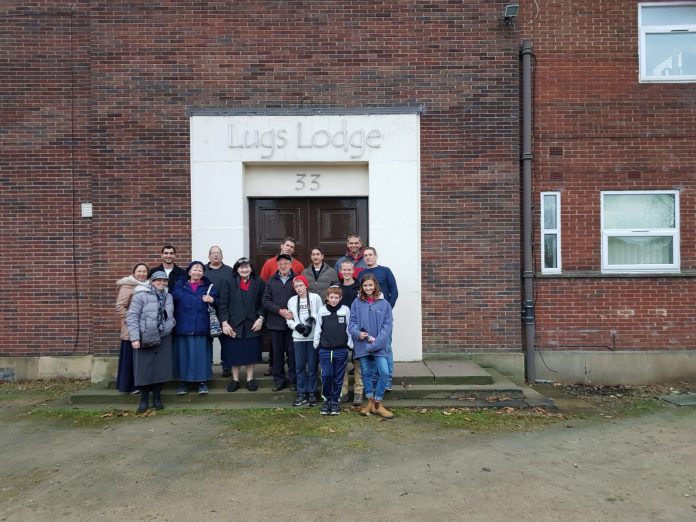 Tuesday November 14th 2017, the week in which Parashat Toledot was read was a particularly appropriate day for the Saville family to visit their home town of Middlesbrough. 12 family members came from Israel and two from London. The first tourist site visited was the river Tees and the Transporter Bridge which preceded road bridges over the river. The group enjoyed an explanatory talk by sister Ruth Posner followed by self-catered lunch in the Bridge museum and a ride on the Transporter.
Next stop was the cemetery where four family members are buried. Sadly one tombstone was flat on the ground so without another thought the strong men of the group lifted the heavy Matzeva and secured it upright in its place. Psalms and memorial prayers were recited at each tombstone and the visit ended with the group singing Adon Olam, one of the many family tunes to have been passed down from Lithuania to Middlesbrough to Israel.
We then drove in three hire cars to the family’s first home in the 1930s in Ayresome Park Road where the group were thrilled to be invited into the house. The source of the family’s love of Chazanut was pointed out as the space in the living room once occupied by a radiogram. The kitchen door which wouldn’t open in 1947 due to abnormally heavy snow had long been upgraded. We identified the bedroom in which brother David z”l slept as a baby and recalled that when father Morris returned home on leave from the RAF in 1943 and popped his head round the door, David naturally enough, didn’t recognise him and cried bitterly. Ayresome Park Road was the home of the local soccer team whose supporters in their flat cloth caps were described by father Morris as “a lot of Meshugoyim”, but that didn’t stop his two sons sneaking into the ground for the last 10 minutes when the gates opened.
Next stop was our second home in Orchard Road where we lived in the 1950s. This time there was no-one at home but that did not stop the group entering the garden by an unlocked gate to see the site of Test matches between England and Australian teams of the early 50s represented by the two brothers. We then drove to the synagogue which was closed down in 1998 when two of its remaining Sifrei Torah were taken to Israel where they are still in regular use. The fabric and some of the interior of the building is the same as it was when it closed but apartments now occupy the place of the sanctuary. The doors leading to the Cheder rooms have been blocked up but the memories of the teachers and their Torah lessons live on in the family. The last remaining Jew in Middlesbrough greeted us when we arrived and we recited Tefilat Mincha with only 1 short of a minyan which used to happen regularly towards the end of the life of the synagogue.
From there we proceeded to St Barnabas Road the site of the family Kosher deli which operated from the 30s till the 60s. The shop is now split into two apartments but we were able to sense a feel for the old shop by visiting the cobbled alley behind it. We drove past grandparents’ house in Berner St where memories of Shochet Zeide Saville shechting a chicken in his back yard came back to mind.
Our final stop was the primary school which all three siblings attended in the 40s and early 50s. The buildings look the same apart from a new addition between the Juniors’ and Infants’ sections. The school guide welcomed us warmly offering us space in the Staff car park and coffee in the staff room. He gave us a tour of all the buildings and we noticed how modern and bright the schools were compared to the dismal and dingy classrooms we remembered. The pens with nibs, inkwells and blackboards have long gone and been replaced with state-of-the-art drawing materials and computers.
The group agreed at the end of the day that this was a pilgrimage worth making once but no more in a lifetime.