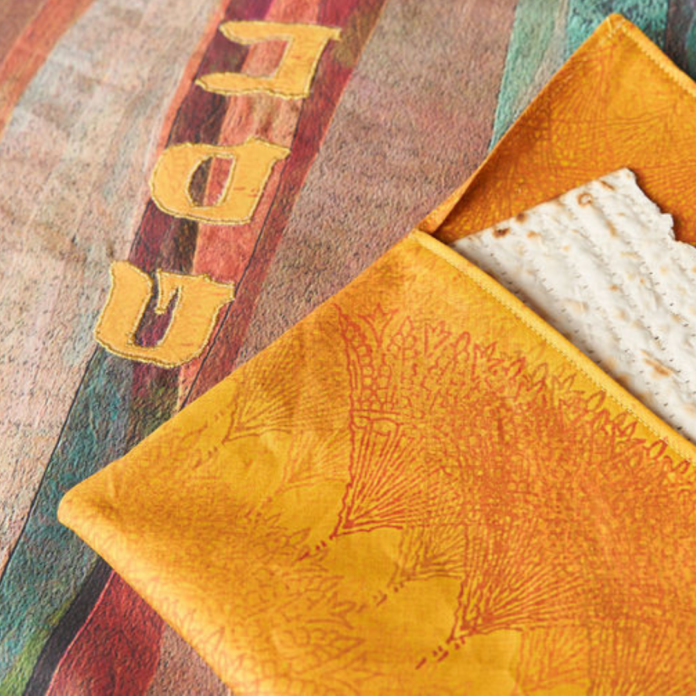 As the seder winds down the tension builds. Who has stolen the afikoman, and what price will it take to release this crucial hostage, so that the seder can continue? Nervous negotiations unfold at seder tables across the Jewish world, in an attempt to liberate the afikoman “prisoners”. After all, Pesach is the night of liberty.

Well before the matzo was swiped and concealed by eager children, the afikoman was “covered”. Separated from a whole matzo hours earlier, the afikoman piece was placed in a bag or under a napkin. As this matzo piece was originally hidden it is nicknamed “tzafun” or the “hidden” food. Additionally, the very term “afikoman” is based upon the process of “unveiling” covered matzo (“afik” literally means to take out). Evidently, concealing or hiding afikoman matzo is essential to the experience.

By concealing the afikoman, we revisit a “monument” of hidden food from our national past. The night we swiftly departed Egypt, we were unsure about our itinerary and about the availability of food in a terrifying desert. Hurriedly, we wrapped whatever food we could get our hands on. In the chaos of the departure, we grabbed half-baked breads from our ovens. We collected leftover matzo and marror from that first fateful seder night in Egypt. Unsure of the future, we snatched whatever scraps and parcels we could.
The “wrapping material” for these half-eaten scraps of food was even more odd. We wrapped these morsels in elegant clothing which had been gifted to us by the Egyptians. Hours earlier, our former persecutors, who now admired us, showered us with gold, silver, and fine linens.

However, everything was moving too quickly, and we didn’t know what to make of this clothing, or even how to wear them. Ancient slaves did not dress in finely tailored clothing or in silk dresses. In many ancient societies, as a sign of humiliation, slaves were entirely forbidden from wearing any clothing. We left in such a mad dash that we didn’t even have the time to “try on” our freshly laundered silk clothing. We stuffed whatever food we could gather into these linens and silks, and sprinted out of Egypt.

As slaves who had been traumatized by hunger and starvation, we were highly insecure about this food. We didn’t dare store this linen-wrapped food in our carts or upon our animals. Perhaps they would be stolen. Anxious and uncertain, we placed these elegantly wrapped leftovers upon our shoulders, where we could personally guard them.

Leftover food, wrapped in newly acquired silks placed upon frightened shoulders, epitomizes how uncertain we were about our future. Little did we know, that a few weeks later we would be treated to abundant and limitless heavenly food. We had no clue. Yet we left and took a leap into the great unknown. We followed our heart and our loyalties and ran from Egypt into a desert of faith. Into the great wide open.

Wrapping the afikoman recalls that national leap of faith. Faith sometime demands jumping into the unknown. We cling tightly to our past because it is certain and familiar, while the future is always frightening. Fear is always the price for change. Unwrapping the afikoman at the end of each seder summons us to unwrap the future and take important leaps of faith, even at the cost of uncertainty. If they did, we can. If they could walk bravely upon hot desert sands, we can make the frightening but valuable changes in our lives. Unwrap the afikoman and unpack the future.

There is an additional purpose to covering the afikoman matzo. Eating afikoman substitutes for our “lost” korban Pesach. In the mikdash era, the seder concluded with a small taste of grilled korban Pesach meat. Unable to offer this korban, we simulate that meat with our final afikoman matzo.

Korban Pesach meat must be vigilantly guarded. If the meat goes unattended – even for a few minutes- it becomes invalid. We symbolically conceal the afikoman matzo to reproduce the original guarding of the korban Pesach meat. Afikoman matzo cannot just be set aside for later consumption, but it like the Pesach meat, must be protected and guarded by a handkerchief or within a bag.

Afikoman matzo is guarded in a bag, but all matzo is essentially, “guarded bread”. All matzo is actively guarded against becoming chametz. The higher grade of matzo shmurah -necessary on the night of the seder- is guarded against contact with water even before the baking process commences. All food on this night is guarded- from Pesach meat, to afikoman substitutes, to the general matzo we consume.

Guarding food on this night isn’t just a practical halachik measure to prevent bread from leavening, or meat from becoming invalid. We guard food this night because the overall night is one of guardianship. The night of the seder is referred to as “leil shimurim”, or the night of watching.

On leil shimurim Hashem watched us and, after centuries of fear and slavery, we finally, felt protected. On leil shimurim, the night of watching, Hashem became OUR guardian. However, on this night of leil shimurim WE also became guardians. Released from slavery we were tasked with the historical mission of guarding humanity at large. We were appointed to prevent humanity from slipping into brutality and moral dysfunction. We were commanded to preserve Hashem’s name in a confused world which rejects Him. That night we started guarding humanity against its lesser self.

Pesach is both zeman cheiruteinu, the holiday of liberty, but also, leil shimurim- a night during which which freed slaves became guardians of humanity. That night we were protected by Hashem so that we could protect others. Therefore, on the night of Pesach we guard everything- from our food, to our world, to our values.

Over the past two thousand years our role as guardians must have strained the imaginations of our ancestors. We were pushed to the margins of society, and it was we who required protection. Sadly, that protection didn’t always materialize. During Pesach, which often coincided with Easter, Jews living in Christian lands often suffered hideous pogroms. Ironically, the night we were promised protection and were designated as guardians, we were often at our most vulnerable.

The tables of history have now turned, and we are, once again, guardians. We have the great privilege to guard our homeland against hostile opposition and against vociferous denial of our privilege to the land of G-d. Sadly, over the past few weeks in Israel, this struggle has intensified, as we have faced a renewed wave of terror. In every generation they rise upon us. Lucky are we to live in a generation in which we can rise up and defined ourselves. We live in the era of shimurim and in the land of shimurim.

Afikoman reminds us that we are guardians- of our matzo, of our land, of our world and of future. We guard everything..silently but courageously.