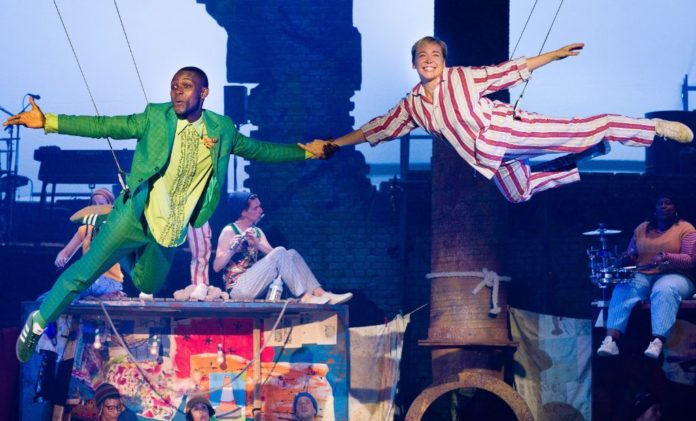 We have two new theatres serving lucky theatregoers in the northwest London area. From the team behind the King’s Cross Theatre, the Troubadour offers a modern, theatrical experience. Both Wembley and White City are situated in areas of cultural regeneration. White City, five minutes from Westfield and next door to the new BBC Media Village with its cool restaurants and cafes. It’s a huge, £5m, state-of-the-art complex where even with two shows running concurrently, queuing was none to minimal; something that you don’t really want to do with kids in tow.

Peter Pan has flown in via the National Theatre. A stunning, Sally Cookson production of JM Barrie’s classic tale about a boy who never wants to grow up. Recommends for ages 6+, we took a chance and with my nearly 4 and 7 year olds. Following a sold out run at the Bristol Old Vic, the show, marks the venues first, as its grand opening and makes great use of the huge auditorium.

A story to delight both children and adults alike, this musical production begins in a rather tame fashion, the Darling family in Edwardian dress, preparing the three children for bed. Nothing much to see here, except the comical character of Nana part nurse part dog, played by strapping Mark Kane, a thick Scottish accent in a very frilly, white dress. It’s only when Peter Pan appears, looking for his bright green shadow that he’d been separated from during a previous visit, tempting Wendy to fly off in to the night, that the show really starts to come in to its own. The vast space is perfect for the rigging that enables the cast to fly over the audience and perform thrilling, aerial acrobatics.

Daisy Maywood’s believable, yet wonderful portrayal of the twelve-year-old Wendy, agrees to follow Peter Pan to Neverland, a fantastical place filed with hipsters riding BMX bikes, craving a female, any female, to be their mummy. The set becomes much more exciting with a magical flight through the solar system, finally arriving to a colourful, energetic scene where the lost boys are at play. From here on in, the show oozes energy and charm with a big dose of gore and sentimentality.

Kelly Price’s female Captain Hook is a brutal villain, yet tuneful delight and pays homage to JM Barrie’s original female pirate. Resplendent with silver teeth and hook, she even makes me wince as she brutally kills one of her own. My four year-old intermittently buries his head in my neck then turns back to watch, such is his fascination with pirates.

There’s a tragi-comedic air to this production. The concept of a mother’s love and the way that Peter Pan had flown the nest only to return to find the windows barred. Pan himself, the delightfully talented John Pfumojena, whilst drowning, uttering the words ‘ to die would be an awfully big adventure’, the Lost Boys hankering after Wendy and the almost fatal poisoning of one of the big stars of the show; the camp, sparklingly ebullient, Tinkerbell complete with fairy light head-dress and his own gobbledygook language. He drinks the poison left by Hook to kill Peter Pan, in order to save his friend. Our feelings are luckily spared with a little cajoling of the audience and some participation, clapping Tinkerbell back to life, reminding us that fairies really are magical.

There is something for everyone in this production. Relaxed, reggae vibes of the talented band and passionate, tuneful voices, especially so of Hook and Wendy, stunning set and puppetry and a classic tale that elevates women, where ‘ one girl is worth 20 boys’. It appeals on many levels. The children happy with defeated ‘badies’ and getting home safely to mummy and daddy. The adults left philosophically pondering Peter Pan’s fate.

What is for sure, this huge production a winner all round. Now playing until the 1st of September. It has done the National Theatre proud. Its only downfall, the gigantic space puts big pressure on ticket sales. A shortened run, get there before its too late.