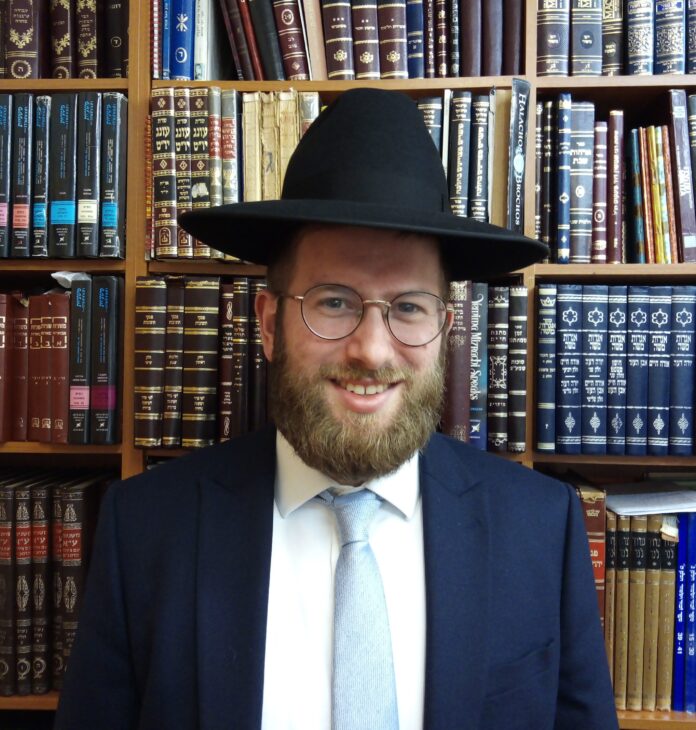 The Kehilla of the “Prestwich Shteible”, Damesek Eliezer, welcomed Rabbi Yisroel
Rose א”שליט ,as their new Rov on Shabbos, Parshas Emor, along with his
Rebbetzen and children.

Reb Yisroel was born and raised in Prestwich. He has taken over from Rabbi
Shmuel Goldberg א”שליט ,who recently retired, after 38 years of dedicated service.
During this time the shul was rejuvenated and became a focal point for tefilla in the
neighbourhood, of which he was the senior Rov.

Reb Yisroel arrived to warm divrei brocha from Rabbi Goldberg א”שליט ,having been
active in harbotzas hatorah in Amsterdam for close to 4 years. Prior to that he learnt
in Yerushalayim in The Kollel of Harav Mordechai Eliyahu ל”זצ -Darchai Hora’ah
Lerabonim under Harav Yosef Eliyahu א”שליט .He graduated from the Ner Le’elef
training program and holds an MA in Jewish Education. As a bochur, Rabbi Rose
learned in Yeshiva Letzirim Tiferes Yaakov, Gateshead and in Heichal Hatorah in
Yerushalayim, fondly known as Reb Tzvi’s.

Reb Yisroel has several semichas including from the Rabbinate of Israel, Rabbi
Yaakov Meir Stern א”שליט ,Rabbi Yisroel Yom Tov Tukechinky א”שליט and Rabbi
Zalman Nechemia Goldberg ל”זצ .Throughout his time in Eretz Yisroel and
Amsterdam he gained extensive and regular shimush in a host of halachic areas
from a multitude of rabbonim.

Reb Yisroel has a host of innovative ideas to take the Shteible forward into a new
era after first acquainting himself with all the members in this vibrant Beis
Hamedrash, that was established almost 70 years ago by Horav Menachem Mendel
.Schneebalg zt”l.

A welcome kiddush was held after a davening which the Rabbi Rose shlita gave his
visions for the shul. A formal hachtoro is planned in the coming months.