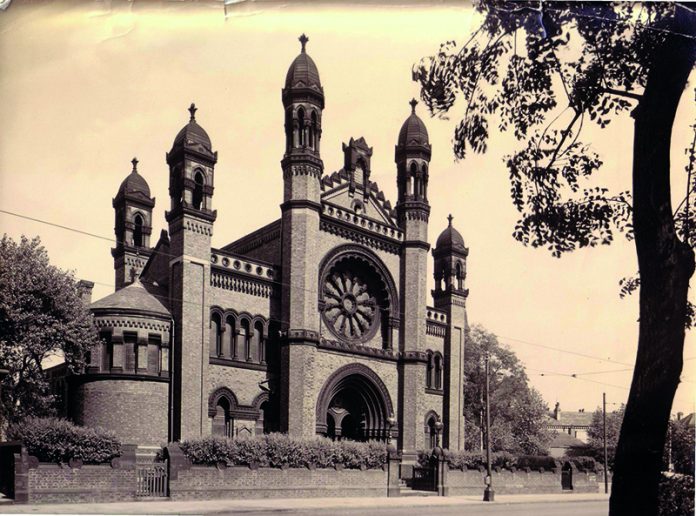 The Beatles put Liverpool as a city on the global stage back in the swingin’ sixties.

Indeed the Beatles Story Exhibition and “new” Cavern Club are must-see attractions for Fab Four fans journeying by road, rail or the many cruise liners that stop over as a port of call.

Liverpool FC’s Anfield Stadium and Albert Dock are likewise among other popular sites.

The city is also known for buildings with stunning architecture, and for aficionados near the summit of every Top 10 list is Princes Road Synagogue.

Originally the home of Liverpool Old Hebrew Congregation, the Grade II listed building in Toxteth was designed by Scottish brothers William & George Audsley, who found inspiration for its painted and gilded Victorian interior whilst travelling in Europe.

The siblings went on to become early pioneers of the first New York skyscrapers.

Members of the congregation funded the project, which was completed and consecrated by Chief Rabbi Dr Nathan M Adler in September 1874.

Costing £13,000 – over £100m today – with seating for 874 worshippers, this historic shul is known locally as the jewel in the crown and down the years has witnessed tales aplenty.

The first Jews settled in Liverpool around the 1740s. Historians detail synagogues in Cumberland Street, Turton Court and Upper Frederick Street before a first purpose-built shul in Seel Street seated 290 worshippers in 1808.

Thousands of Jews flocked to the city from Europe shortly after this Victorian period, and the Jewish community hit a peak of 8,000 in the 1940s but now stands at around 2,000.

Sadly, long gone are the days when Princes Road, which now has around 200 members, was bursting to capacity. But Shabbat and festival services still take place alongside regular shul tours, concerts and events to keep this historic building in the public eye.

Indeed, Princes Road shul is enjoying a renaissance under the dynamic leadership of Rabbi Ariel Abel and his wife Shulamit in a permanent, part-time role. The couple facilitate shul visits and Shabbat hospitality, and they are involved in educational events and student Shabbatonim.

He also leads the Southport community on an ad hoc basis.

Most recently, Rabbi Abel has been selected for commission with the rank of Ch4 (Captain) into the Royal Army Chaplains Department effective tomorrow. Posted to Merseyside Army Cadet Force, it will not affect his role as rabbi of Princes Road Synagogue.

Away from shul life, Rabbi Ariel is a freelance journalist and works as an academic consultant.

Born and educated in Manchester, he graduated in Semitics and Languages at Manchester University prior to gaining semichah in Israel.

During a period of rabbinical globetrotting, Rabbi Abel, who has four children from his first marriage, served communities in Berlin, Liverpool and London.

Rabbi Abel also worked in South America before returning to the rabbinate in the United Kingdom. Currently completing law exams at the University of Central Lancashire in Preston, he was Princes Road minister from April 1999 to October 2002.

So has the role changed a second time around as spiritual leader of the city centre shul?

“Membership was younger in my first spell but it was the older contingent of the Liverpool Jewish community,” he explained.

“Members need a rabbi to take them through life events.

“Life is the tapestry that it is and human experiences enable you to consult better.

“When you go through certain situations, people are comfortable asking for advice as you have a pastoral edge in that sense.”

The 42-year-old minister added, “We are a synagogue in a vastly developing city. Liverpool has come on in leaps and bounds; it’s hustling and bustling with tourism as cruise liners dock here all the time.

“Tourists come from all over the world, and our shul is now on the city trail for attractions.

“We welcome schools each month and have a packed rota that provides cash inflow. I also get lots of emails from people asking to visit our shul so we arrange tours.

“On top of simchas, we hold shul events for the Jewish community that are well attended, and because we are a ‘cathedral’ synagogue, we host civic events.

“Lots of families opt to come here because of our setting, decorum, type of service and decor, which is magnificent.”

The trio of Orthodox shuls cooperates at various times such as at Purim enabling as many youngsters to gather together as possible.

When it comes to Jewish identity, Princes Road enjoys tremendous success as people search for their roots.

“We come into contact with so many people of Jewish descent for whom the city centre is a place to find a Jewish connection,” Rabbi Abel explained.

“It’s been incredible, Liverpool is very much a through-zone for Jewish refugees.

“Princes Road is rejuvenated in a sense that although we might not fill our seats anymore on a Shabbat or festivals, people regularly connect with us.

“The Wirral no longer has synagogues but people get in touch from the area. We’ve experienced the same north and south of Merseyside going into Chester, Warrington and Widnes.

“This is far from a part time role. We have continuous engagement with Jewish people and those of Jewish descent. People come and spend a Shabbat with us. It’s been fascinating.”

Rabbi Abel added, “During my first spell, I had to take a three-mile walk to shul, which was a geographical dislocation, but being in town we are in the midst of a multicultural, developing city where the shul serves as more than just a congregational location.

“We are a magnet for people seeking anything Jewish.

“People are looking for a spiritual connection, to be in a synagogue, an ancient place where they can connect and be welcome. They are not part of our shul membership, but nonetheless we are very happy that as many people as possible want to show an interest.”

He continued, “We are based in an area which has Jewish connections and positive influences.

“Louise Ellman is the local Member of Parliament; she lobbies for Jewish people and Israel in parliament, yet this is a Muslim-populated area. But they support her as she is humane and cares about constituents. People know her and it’s had a really positive effect.

“Also, because the shul has been here so long, we are prominent and visible.

“Things have bounced back for the Jewish community, and not just at our shul. The rabbis at Childwell and Allerton, at Lubavitch, and our student chaplain are all positively making waves.”

When it comes to interfaith and outreach work, Rabbi Abel and his wife, Shulamit, have clearly come to the fore.

They are members of Faith Network for Manchester and independently operate a network of contacts to improve inter-communal relations.

“We do a huge amount of work to reach dispersed Jews and keep Chief Rabbi Ephraim Mirvis updated,” he explained.

“Because of this interfaith work there is a better understanding of Judaism.

“We share meals and conversations on a Shabbat with people from Liverpool and beyond. We sit around a table dining, learning about each other, enjoying time, and singing songs.

“This interaction has been really fulfilling and word gets out through the grapevine.

“Results are there to be seen and we are building on it. Also, in the age of social media, through Facebook, we are in dialogue with other religions.

“The Jewish religion has become an integral part of a cosmopolitan city, and in Liverpool we have the wherewithal, a safe pair of hands to deal with sensitive issues.

“There are sensible people from various backgrounds and religions who can steer conversations in a productive direction.”

Rabbi Abel added, “People come to our shul not only because it’s a synagogue but because they want to view an architectural gem of a building. Princes Road is a national treasure, and we are a listed building where the acoustics are unrivalled.

“Cruises make a beeline to Liverpool because it is a destination of amazing culture.

“Liverpool is blessed as a city. Our shul is blessed with the extra attention it gets, so the more visitors that come our way the merrier.”