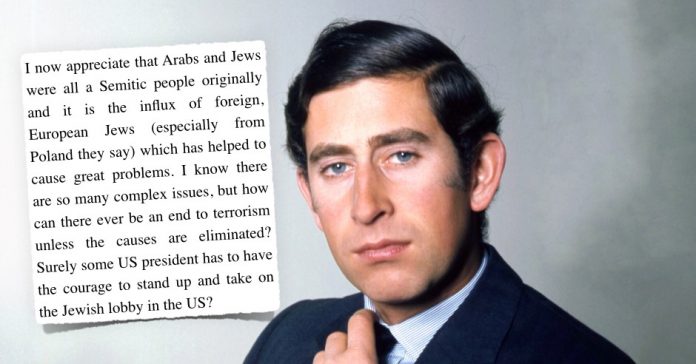 In a letter exposed yesterday in the Mail on Sunday, it has been revealed that Prince Charles made deeply troubling comments about refugee Holocaust survivors and the power of the “Jewish lobby”.

In a 1986 letter to explorer Laurens van der Post, the heir to the throne wrote: “Dear Laurens, Am on my way to Cyprus and Italy having passed through Suez Canal. Lovely having three days at sea. This tour has been fascinating and have learned a lot about Middle East and Arab outlook. Tried to read a bit of Koran on way out and it gave me some insight into the way they think and operate. Don’t think they could understand us by reading the Bible though. Much to admire some aspects of Islam – especially accent on hospitality and accessibility of rulers. Also begin to understand their point of view about Israel. Never realised they see it as a US colony. I now appreciate that Arabs and Jews were all a Semitic people originally and it is the influx of foreign, European Jews (especially from Poland they say) which has helped to cause great problems. I know there are so many complex issues, but how can there ever be an end to terrorism unless the causes are eliminated? Surely some US president has to have the courage to stand up and take on the Jewish lobby in the US? I must be naïve, I suppose! Charles”

Gideon Falter, Chairman of Campaign Against Antisemitism, said: “This letter is disturbing. It appears that our future king believed in 1986 that the “influx” of Holocaust survivors to Israel were not “Semitic”, “cause great problems” including terrorism, and should be “eliminated”, presumably through their removal. The letter also appears to endorse the view that Israel is not simply the result of Jewish self-determination in the historic Jewish homeland, but the result of bullying by an all-powerful “Jewish lobby” which holds US presidents in its clutches. We view these comments as unmistakably antisemitic.

“However, since the letter was written, the Prince of Wales appears to have warmed to the Jewish community and we note his friendship with the former Chief Rabbi, Lord Sacks, as well as his attendance at the inauguration of the present Chief Rabbi, Ephraim Mirvis.

“In order to reassure the worldwide Jewish community, including Jews living in Israel, that the heir to the throne has changed his views, these historic remarks must urgently be repudiated by Prince Charles.” 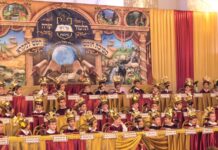