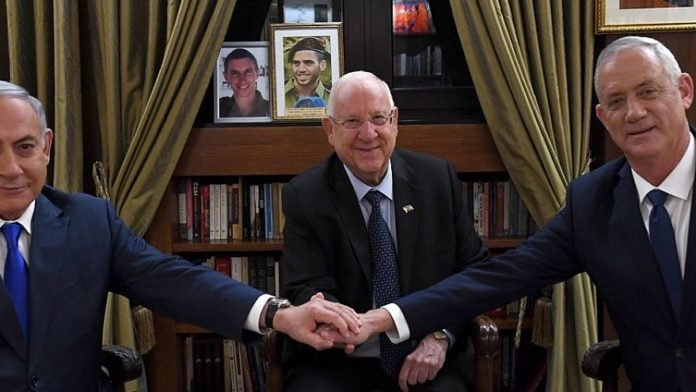 Blue and White leader Benny Gantz has 28 days to form a coalition government in Israel.

For Benjamin Netanyahu, who informed Rivlin he could not form a government on Monday, he remains in post as Prime Minister for now, but his record breaking tenure as Israeli leader appears to be coming to an end.

Rivlin and Gantz will formally give statements at the President’s Residence in Jerusalem this evening.

If Gantz fails to form a working coalition, Rivlin must decide if another Knesset member can form a coalition or whether Israelis face a third set of elections.

“We’re going to do a day’s work now,” Gantz said on Tuesday. “We’re always optimistic, it’s a way of life.”

Netanyahu blamed Gantz for his failure to form a government.

“Ever since I received the mandate I have worked tirelessly, both openly and covertly, to form a broad coalition government,” he said in a video message. “That’s what the people want, and that’s what Israel needs in face of the ever-growing security threats in the region.

“The time for spin is over, now it is time to act,” noted a statement. “Blue and White is determined to form a liberal unity government headed by Benny Gantz, just like the public voted for a month ago.”

Blue and White will hold talks with heads Knesset’s factions, including Netanyahu’s right-wing bloc in a bid to form a unity government.

“In accordance with the provisions of Basic Law: The Government (2001), the Director General of Beit HaNasi (President’s residence), Harel Tubi, will speak to all Knesset factions to inform them that the president intends to transfer the mandate for forming the government, as soon as possible, to Chairman of Blue and White, MK Benny Gantz and to make available to him the 28 days allocated to do so under the law”,” read the statement.

“It is in Israel’s interests to avoid another round of elections and form a broad liberal unity government,” he noted. “Netanyahu is driven solely by a need to advance his own personal agenda and drags the entire Likud in his wake.

“He doesn’t want a government, he wants elections for his own personal motives. He can’t accuse us of not negotiating, we (Yisrael Beytenu) appealed to him both in writing and verbally.”

Liberman refused to say if he would join a minority government formed by Gantz.